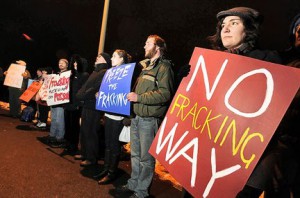 As I have often written about in the past, the oil industry is all about risk and reward. At some stage it has to lure large scale investors to bet large amounts of money that it has found large reserves of oil gas than can be readily exploited.

It is an industry that is often prone to hyperbole and hype in order to secure that finance. The history of the industry is littered with examples of it overplaying the size of its reserves. Indeed many industry analysts believe that Saudi Arabia has been overstating its reserves for years, something that could have a profound effect on the global economy.

But there may be a problem closer to home.

Good on you, New York Times, for your detailed expose on Saturday that looked at the hype surrounding shale gas and fracking. To pardon a pun, it ain’t all it is cracked up to be. And the paper asks the question whether the shale gas bubble is literally about to burst.

According to the Times, “Natural gas companies have been placing enormous bets on the wells they are drilling, saying they will deliver big profits and provide a vast new source of energy … But the gas may not be as easy and cheap to extract from shale formations deep underground as the companies are saying.”

The paper trawled through hundreds of industry e-mails and internal documents. It analysed data from thousands of wells. And what they found is alarming.

The paper says: “In the e-mails, energy executives, industry lawyers, state geologists and market analysts voice skepticism about lofty forecasts and question whether companies are intentionally, and even illegally, overstating the productivity of their wells and the size of their reserves.”

The paper quotes some amazing emails with quotes likening what is going on to Ponzi, schemes and Enron:

•    Do you think that there may be something suspicious going with the public companies in regard to booking shale reserves?” a senior official from Ivy Energy, an investment firm specializing in the energy sector, wrote in a 2009 e-mail.
•    “I wonder when they will start telling people these wells are just not what they thought they were going to be?” wrote a former Enron executive in 2009.
•    In September 2009, a geologist from ConocoPhillips, warned that shale gas might end up as “the world’s largest uneconomic field.”
•    “Money is pouring in” from investors even though shale gas is “inherently unprofitable,” an analyst from PNC Wealth Management, wrote in February. “Reminds you of dot-coms.”
•    “The word in the world of independents is that the shale plays are just giant Ponzi schemes and the economics just do not work,” an analyst from IHS Drilling Data, an energy research company,  wrote in August, 2009.
•    “And now these corporate giants are having an Enron moment,” a retired geologist from a major oil wrote in February. “They want to bend light to hide the truth.”
•    Deborah Rogers, a member of the advisory committee of the Federal Reserve Bank of Dallas, wrote in Nov, 2009, to a petroleum geologist in Houston:  “These wells are depleting so quickly that the operators are in an expensive game of ‘catch-up.’ ”
•     “Our engineers here project these wells out to 20-30 years of production and in my mind that has yet to be proven as viable,” wrote a geologist at Chesapeake in March to a energy analyst. “In fact I’m quite skeptical of it myself when you see the % decline in the first year of production.”
•    The same Chesapeake geologist said in another email: “In these shale gas plays no well is really economic right now. They are all losing a little money or only making a little bit of money.”

The paper also quotes an unnamed source saying “I think we have a big problem.”

Someone who speaks on the record is Art Berman, a Houston-based geologist who worked for two decades at Amoco, who tells the paper: “This kind of data is making it harder and harder to deny that the shale gas revolution is being oversold”.

So how soon will the boom turn to bust?