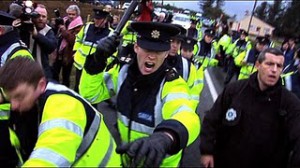 On and off for twenty years I have written about the oil industry. I have worked with communities from Alaska to Africa who have been threatened by Big Oil. So often the stories are the same: an industry that is indifferent to local concerns and needs.

I have no idea how many communities around the world are currently fighting Big Oil in their backyard. But they, and anyone who campaigns against the oil industry should watch the compelling film “The Pipe”, about the fight of one small community against the might of Shell in Western Ireland.

The Pipe records in all its brutal honesty the community battle against the Corrib gas pipeline in the beautiful and wind-swept area of Rossport, County Mayo. The film focuses on events from 2004 and 2009.

I have long watched the fight from afar. I know of film makers and activists who have been to Ireland to report on the struggle of one community to fight for their land, their livelihoods, their dignity and their kids’ future in the face of brutal aggression by the oil company, the Irish Police and their lackies; the latter who hide behind their hoods and their anonymity to dish up violence as if it is a right.

It graphically depicts how a local community – who are just fighting for survival – can have the mechanisms of State  oppression – violence, surveillance, legal intimidation, demonisation  – cruelly employed against them.

The film depicts of the death of local democracy and how the the State of Ireland protects Shell above its own people.

So often this story is not reported or misreported in the press. It is not a story of a farmer trying in pure desperation to save his land or livelihood, but a “violent” protestor from “out” who is just intent on trouble. And all the time it is the community who have the violence inflicted on them. In the name of “balance” a journalist gives more air time to the oppressor than the oppressed.

So what I really liked about 30-year-old Irish filmmaker Risteard Ó Domhnaill’s film is that it does not pretend to do anything else apart from show the struggle against Shell’s pipeline from the perspective of the community.

“The film shows a perspective. It is unbalanced. But as a feature film it is a good telling of a story,” explains Ó Domhnaill. “It is just me allowing the local people to have their say without it being twisted or turned, and then trying to present it honestly, warts and all.”

He adds: “The television news would show a woman being thrown into a ditch by a policeman and there would be this very polished PR person from Shell stood there saying ‘these are just people who have come from outside the area to cause trouble, and don’t care that this is good for jobs, good for Mayo and good for the country…’ So the local voices and the local story were drowned out.”

The film does tell the local story, warts and all.

The film shows of the madness of the situation. Any rational person would that have thought that there was no way Shell could bring a huge pipeline through this protected and fragile landscape.

“If you looked around Ireland and the rest of Europe, you’d be hard pushed to find a denser concentration of European-designated specially protected areas,” says Ó Domhnaill. “The bay is protected for whales and dolphins, the estuary is protected for wintering red geese and salmon migration, the sand dunes have a very sensitive machair system which provides a unique habitat, then the Rossport bog complex is a specially protected blanket bog with its own eco-system.”

The film follows the plight of those leading the fight against the oil company and state brutality, including the Rossport 5, locked up for 94 days in 2005 for defying a court injunction allowing Shell Oil workers to enter their land to lay the high pressure, gas pipeline close to their homes.

One of the 5 is farmer Willie Corduff, who along with his wife Mary, exhaustion to keep Shell off their land. Willie scraps a living on land that sweeps into sea, just like his father did. His whole way of existence is threatened by the pipe, not to mention his life. He was told by Shell that if the pipeline were to blow up he would have 30 seconds to escape.

“The way this is being done Shell will eventually have to kill people to get them out of their way. But we are going to object to it regardless of what they do to us as our whole way of life is at stake and everything we have ever done to protect the environment to keep it clean for our children and their children. You can’t just walk away from something that is in your blood.”

And for any community fighting Big Oil they can take heart from people like local fisherman Pat “The Chief” O’Donnell, who takes on the world’s largest pipe-laying ship, the 96,000-tonne, 300m-long Solitaire, arguing his right to fish in the area overrides Shell’s right to lay the pipe.

You know what happens next, O’Donnell is of course arrested. Time and again. And his boat is impounded. For doing nothing but fighting for his livelihood and to make sure his crab pots are not destroyed.

“When you see that going on, you ask yourself ‘who’s right and who’s wrong?'” says O’Donnell.

“But I know the answer in my heart.” And Pat, we know too.

After the film was finished, one of Pat’s boats was later sunk by masked thugs.  Shell of course, denies any involvement.

But still Pat and the other keep up the fight…