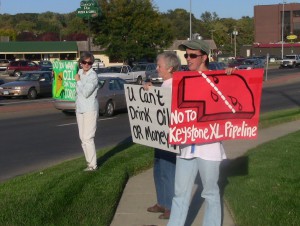 As the row over the Keystone XL pipeline continues, the US is sending mixed messages over the dirty tar sands.

Speaking to the Gas and Oil Expo and Conference, David Jacobson, the U.S. Ambassador to Canada, waxed lyrical about Canada, describing it as the “safest and most secure foreign supplier” of oil the US.

“The United States sees Canada as a pillar of our energy security,” said Jacobson. This is a huge endorsement for the Canadians although Jacobson went on to say that additional improvements in the environmental performance of tar sands were “necessary”.

The diplomat’s remarks came amid more criticism of the Calgary-based TransCanada Corp.’s proposed $7-billion Keystone XL pipeline, which will transport up to 700,000 barrels per day of diluted bitumen from northern Alberta’s oilsands to refineries on the Gulf Coast of Texas.

As I blogged earlier in the week, Monday was the deadline day for comments on the proposed pipeline. The US Environmental Protection Agency has now weighed into the debate.

The EPA – having weighed up all the evidence – has concluded there are still numerous serious mistakes and omissions in the current proposal:

“We have a number of concerns regarding the potential environmental impacts of the proposed Project, as well as the level of analysis and information provided concerning those impacts. Our concerns include the potential impacts to groundwater resources from spills, as well as effects on emission levels at refineries in the Gulf Coast,” wrote Cynthia Giles, the EPA’s assistant administrator for the Office of Enforcement and Compliance Assurance.

In addition, the EPA is “concerned about levels of GHG emissions associated with the proposed Project, and whether appropriate mitigation measures to reduce these emissions are being considered.”

Finally, the EPA argues that the Supplementary draft EIS “does not contain sufficient information to fully assess the environmental impacts of the proposed Project, including potential impacts to groundwater resources and communities that could be affected by potential increases in refinery emissions.”

To give you just one example on greenhouse gas emissions:

Last year when the EPA reviewed the draft EIA it found it to be “Inadequate” because potentially significant impacts such as climate change were not evaluated.

This time the State Department has included efforts to “improve the characterization of life cycle GHG emissions associated with Canadian oil sands crude”.

However, while the EPA “appreciate the inclusion of such estimates, EPA believes that the methodology used by the State Department and its contractors to calculate those estimates may underestimate the values at the high-end of the ranges cited in the lifecycle GHG emissions discussion by approximately 20 per cent.”

Indeed the EPA argues that “we believe it is important to be clear that under at least one scenario, the extra GHG emissions associated with this proposed Project may range from 600 million to 1.15 billion tons CO2-e, assuming the lifecycle analysis holds over time (and using the SDEIS’ quantitative estimates as a basis).”

That could be a billion tons of carbon dioxide that Keystone might put into the atmosphere.

And yesterday various environmental groups in to the debate, called on Secretary of State Hillary Clinton to listen to the 265,000 citizens who have submitted comments or signed petitions urging her to deny a permit approving the Keystone XL project.