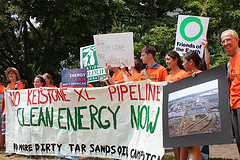 Today is the final day for public comment to the US Department of State over the draft Environmental Impact Statement for the highly controversial Keystone XL.

Seen as a litmus test for the Obama administration’s policies on climate change, Keystone XL is the proposed 1700-mile oil pipeline that is planned to bring some 830,000 barrels per day of the dirty tar sands from Alberta to refineries on the U.S. Gulf Coast.

Climate change effects aside, Keystone 1 is already a disaster, and only begun re-pumping oil yesterday after being shut for a week after several leaks in recent months, one of some 10,000 gallons of oil.

You cannot underestimate the importance of Keystone XL to the Canadians. In many ways it is a lifeline to the world. If it is approved the tar sands are set for major international expansion. If it is rejected then the whole growth strategy for the tar sands may not be in tatters, but nearly in tatters.

All the indications are that the Canadians will get their way. The final version of the IEA will be issued sometime this summer and it is predicted that it will conclude that the environmental concerns should not derail the project.

Secretary of State Hillary Clinton has to then decide whether to approve the project and is expected to make a decision by the end of the year.

But it may be too politically sensitive even for her, so it could be passed upstairs to Obama. Or it could land on his desk anyway if the State Department rules favourably, but the Republican- bette noir the Environmental Protection Agency rejects the proposal.

Many see it as defining decision for Obama but will he allow the controversial project goahead.

For a start will his administration allow it to proceed after a fundamentally flawed EIA?  Late last month, 34 members of Congress wrote to Clinton arguing that the EIA was “inadequate” and that the EPA had given the EIS its lowest ever rating.

One of their main concerns is that the EIA does not address the climatic impact of the tar sands.  Bill McKibben argues that approval of the Keystone XL line “would ensure forever Obama’s legacy as a full-on carbon president.”

Climate scientist Dr Jim Hansen argues that “The scientific community needs to get involved in this fray now. If this project gains approval, it will become exceedingly difficult to control the tar sands monster … An overwhelming objection is that exploitation of tar sands would make it implausible to stabilize the climate and avoid disastrous global climate impacts. The tar sands are estimated to contain at least 400 GtC (equivalent to about 200 ppm CO2).”

If 400 Gigatonnes of carbon is released then the consequences will not bear thinking about.

The ace up the industry’s sleeve may be the jobs card and expect more wizardry from the American Petroleum Institute later today when they release a new study from the Canadian Energy Research Institute (CERI) that will forecast significant employment impacts from Keystone XL and the resulting investment in Alberta’s oil sands.

But any regular reader of this blog will know the API’s job numbers employ Harry Potter-esque number crunching behind them.

So if you want to comment before the deadline today go here.