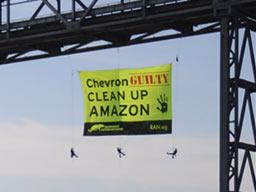 Last week it was Shell’s AGM and its turn to face the wrath of shareholders and activists for its appalling environmental record. This week its Chevron’s turn with its AGM tomorrow.

Protests kicked off in dramatic style yesterday, when activists from Amazon Watch and Rainforest Action Network rappelled from the Richmond Bridge in the San Francisco Bay to hang a 50 foot banner banner saying “Chevron Guilty: Clean Up the Amazon!”

One of the climbers Thomas Cavanagh of Amazon Watch said: “I’ve seen with my own eyes the devastation Chevron caused in the Ecuadorian Amazon, and it’s long past time for the company to clean up its toxic legacy there. And until Chevron does the right thing, we will stand with the Ecuadorian communities fighting for justice.”

Although the banner drop was a spectacular sight just next to Chevron’s polluting refinery in Richmond, it is the company’s legacy in Ecuador – and its continuing legal resistance – that is still generating most protest and anger.

It was back in February that an historic court victory in Ecuador, found Chevron guilty of causing $18 billion worth of environmental damage to the Amazon. But instead of accepting the court’s decision and paying up, the oil giant has vowed to fight the charges, despite the overwhelming evidence of pollution, contamination and disease.

The banner drop is only the start of the protests planned against the company. Amazon Watch and Rainforest Action Network have just published an independently-produced report that finds Chevron is downplaying the significant financial and operational risk the company faces in the wake of the $18 billion Ecuadorian judgment.

The report highlights the vast disparity between Chevron’s disclosures to its shareholders and its sworn legal statements about the “irreparable damage” the company faces from potential enforcement of the judgment.

Tomorrow when Chevron holds its AGM, three community leaders from Ecuador have travelled to California to join in the protests.

Humberto Piaguaje is a leader of the indigenous Secoya people of Ecuador’s northern Amazon rainforest, whose numbers in that region have dwindled from thousands to just several hundred since Texaco arrived in the area nearly 50 years ago.

Another, Carmen Zambrano recalls how “the company told people that the crude was good for their health, and that the contaminated water was safe to bathe and wash in, to drink from. … Her own children are terminally ill and developmentally disabled. Her sister-in-law suffers from cancer; her brother-in-law has serious heart problems. Her neighbours have died and almost everyone she knows has skin ailments.”

Serbio Curipoma, a cacao farmer from the Orellana province of Ecuador, “realized six years ago that the house his family has lived in for 20 years had been built directly atop an unremediated covered oil pit; digging just a few meters into the earth reveals thick crude.” His parents both died of cancer.

But the Ecuadorians will not be the only ones who are protesting against Chevron. They will be joined by activists and communities from Nigeria, Indonesia, Canada, Angola, Alaska and Texas.

This year’s report is the third instalment by the True Cost of Chevron network. Following the press conference to release the report, there will also be a “Toxic Tour” of Chevron’s operations in Richmond, just in case people forget the damage that the oil giant is doing in their own backyard.