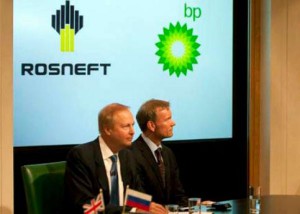 BP’s long-term strategic direction and its credibility with City analysts is in tatters this morning after its bid for a strategic alliance with Rosneft, the Russian state oil champion, collapsed late last night.

A year on from the Deepwater disaster, this was the deal that was meant to revitalise BP’s reputation.

This was the deal that was meant to give BP access to Rosneft’s potentially vast reserves in the Arctic.

This was the deal that was being touted as vital to securing BP’s long-term future.

This was a deal that would also reflect the bold leadership of the new CEO Bob Dudley, who, it was said knew Russia and how to do mega-deals in the country.  Dudley had repeatedly trumpeted the Rosneft deal saying that BP could still offer growth after the Deepwater spill.

But the deal is dead.

Last night was the deadline for BP to reach an agreement in its $16bn share swap deal.

But midnight came and went without Rosneft willing to extend the deadline further.

The deal collapsed because BP failed to buy out their current Russian partners TNK-BP.  Talks broke down yesterday after Alfa-Access-Renova, the main partners in BP’s other main Russian venture TNK-BP, rejected a proposal for BP and Rosneft to buy out their 50 per cent stake for $32bn.

Rosneft is now said to be looking for new partners in the Arctic, including Exxon, Shell, Chevron and several Chinese companies.

One crumb of comfort for BP is that the Russian Oligarchs in AAR, the main partners in BP’s other main Russian venture TNK-BP were sounding conciliatory about the collapse of the deal.

Mikhail Fridman, the leading shareholder in AAR, said in a statement. “AAR is a long-term strategic investor, and we look forward to working with BP on delivering the next phase of TNK-BP’s growth, both in Russia and internationally.”

Fridman added that “AAR also sees significant benefit to developing co-operation with Rosneft within the framework of the TNK-BP Shareholder Agreement, and we plan to continue discussions about potential collaboration among BP, Rosneft and AAR.”

“The feeling is they did not want to do a deal at all,” one person close to the talks told the Financial Times.

Robert Peston, the BBC’s Business Editor added: “I have at last got to the bottom of why Rosneft and the billionaires are unable to reach agreement by tonight’s midnight deadline. It is pretty simple: they don’t trust each other to complete their respective sides of the bargain.”

This morning Bob Dudley was putting a brave face on it too: “BP remains committed to Russia, to working constructively with AAR in TNK-BP and to our existing good relationship with Rosneft. All parties have worked hard to reach an acceptable resolution, as we believe it could offer significant benefits to BP shareholders, to Rosneft, AAR and Russia.”

But privately, he will know that BP is running out of options to find long-term reserves of oil…