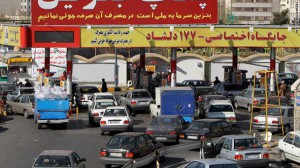 The subsidy battle raging in Washington at the moment is all about what are known as “production” subsidies. These are subsidies that are paid to the oil majors to keep the oil and gas flowing.

But there is also another type of subsidy: this is where governments, often in countries producing oil or developing countries, subsidise the cost of that oil to consumers, by artificially keeping the cost of oil low.

To many it is a slightly crazy idea for governments that should be trying to wean people off our fossil-fuel addiction, carry on subsidising the use of fossil fuels by making them cheaper.

In 2009 – the last year for which figures are available-  governments spent nearly $350 billion holding down the prices of petrol and domestic fuel– which is six times more than the $57 billion they devoted to subsidising renewable energy.

Several countries have begun the painful process of reducing consumption subsidies, including India, Malaysia and Iran. But there has been a fundamental flaw in their plans: The rising cost of oil.

The rise in global oil prices has “more than offset” the strenuous efforts of these countries to reduce the cost of fuel subsidies, according to the International Energy Agency.

But Fatih Birol, chief economist of the IEA, told the Financial Times that rising oil prices had more than cancelled out their efforts. “Despite these efforts, the subsidies in 2010 are significantly higher than they were in 2009,” said Mr Birol.

The Middle East’s main oil producers, notably Saudi Arabia, offer huge subsidies to their population. The more oil you have the lower the prices can go. So, for example, thanks to government subsidies, gas costs just 12 cents a litre in Saudi Arabia.

But the Saudis are caught in an increasing dilemma. On the one hand, these ridiculous gas subsidies are one way of placating the population, and keeping people happy. So far the Kingdom has so far avoided the large-scale unrest happening in other Gulf states.  And cheap fuel – along with lucrative housing unemployment benefits and wage bonuses is one of the reasons.

But on the other hand, the Kingdom is using an ever increasing amount of its domestic production at home. The more it uses at home, the less it can export. If rates continue, the majority of Saudi’s 8.8 million barrels a day will be used for domestic use. If Saudi consumption patterns do not change then by 2028, almost 8 million will be used at home, leaving hardly anything for export.

The global ramifications of this are huge. Saudi exports basically prop up the global oil market. If they disappear the market would be in turmoil.

And for anyone who was thinking that Iraq might fill any stop-gap, and help bring global oil prices down, the short-term signs are not looking good.

According to the FT “Iraq will miss its target to quadruple its oil production by 2017, say senior industry executives and western officials, dealing a blow to hopes that surging output from the country would lower global oil prices by the middle of the decade.”

“I think the Ministry of Oil would not disagree with a ramp-up in production towards 5m-6m b/d by 2015 or so,” Gati Al-Jebouri, the head of Lukoil in the Middle East tells the paper. He said that even the lower target could be challenging. “Whether that is achievable given the infrastructure is a difficult question to answer.”

Indeed one senior western oil official said that Iraq was moving from “propaganda to the reality”, regarding oil output targets.

So it looks like oil prices will remain high for the foreseeable future.

And that means even more money will be spent by governments to keep the price of gas low. And the more money they spend on oil, the less they can spend on renewables.