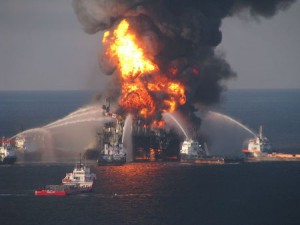 At 10.00 AM today, BP’s 80,000 employees marked a minute’s silence in memory of those who died on the Deepwater Horizon, exactly a year ago.

Meanwhile in the Gulf, relatives of the 11 men who died aboard the Deepwater Horizon are flying over the rig site, back to the epicenter of the disaster.

On land, vigils are scheduled in Louisiana, Mississippi, Alabama and Florida to mark the Anniversary.

A year on, everything has changed for BP, although not that much has changed for the oil industry at large. Slowly but surely drilling is returning to the Gulf. Elsewhere is pretty much business as usual.

Everything has changed for the affected families and thousands of residents in the Gulf who are trying to rebuild their lives and still seek compensation.

Take just one couple: Louis and Audrey Neal, a Mississippi couple who survives on catching crabs. “I don’t see any daylight at the end of this tunnel. I don’t see any hope at all. We thought we’d see hope after a year, but there’s nothing,” says Audrey Neal. “We ain’t making no money.

There’s no crabs,” adds Louis Neal, a lifelong crabber in Pass Christian, Mississipi. “I’m in the worst shape I’ve ever been in my whole damn life. I’m about to lose my whole family,” he said. “I can’t even pay the loans I have out there. That’s how bad it’s gotten.”

What we do know is that a year on – this disaster still has a long way to play out on BP’s future and many others. If anyone tells you that the Gulf is now clean and the oil is gone you know they are lying.

Readers of this blog will know of Samatha Joye’s work looking at the long-term contamination on the sea floor. Earlier this month she said: “I think it is not beyond the imagination that 50% of the oil is still floating around out there.”

Others agree. Fisherman Dan Skermetta argues: “I think the long-term results of the oil spill have yet to be seen because you don’t have anything to gauge it by.”

Greenpeace biologist John Hocevar argues: “Most of the oil is still in the Gulf today. It’s in the water. It’s in the sediment. It’s on the sea floor. A lot of it is washed up into the wetlands. It is still there. It is still being eaten by marine life today.”

Indeed Chris Reddy, from the Woods Hole Oceanographic Institution, that is looking into the disaster, argues that it could be decades before the full impact of Deepwater Horizon is known.

It could be decades too before BP rids itself from the disaster.

Tyler Priest, an oil historian at the University of Houston says  “People have turned their attention elsewhere. But it will play out like Exxon Valdez did. There will be 20 years of litigation.”

Most analysts and legal experts agree that the disaster is likely to end up costing BP much more than the $40.9bn it has so far paid out and set aside.

The bad news is that the final cost to BP is likely to “remain uncertain for years to come” and could reach $60bn (£37bn), according to new analysis from Moody’s, the rating agency.

“We still do not know the total cost and penalties from the spill, but our analysis suggested the figure would be roughly $40bn-$60bn,” Moody’s analysts said.

Others say this is an underestimate: David Pettit, a senior attorney at the Natural Resources Defense Council guesses that, if there is one class action settlement against BP, the company “would be lucky to get out of it for less than $100bn”.

One thing is certain, though, only time will really tell how this one plays out…