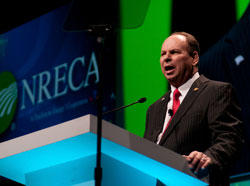 Ever heard of the National Rural Electric Cooperative Association?

We didn’t know much about them either. But they have popped up on our radar as an organisation that is pouring millions into politics.

So we started doing some digging. NRECA calls itself the national service organisations that represents the nation’s more than 900 private, not-for-profit, consumer-owned electric cooperatives, which provide service to 42 million people in 47 states.

Log onto its website and it will tell you that its members promote community cohesion and activism, improved infrastructure, industry, education, health service, community facilities, and housing while reducing crime.

Sounds all good. Doesn’t it. Sounds very Mom and Pop. It goes with their cartoon character, Willie Wiredhand who is the longtime friendly face and spokesplug of rural electric cooperatives across the US.

But there is a hidden side of the NRECA:

To put this into perspective this is more than  double the 737 thousand dollars that the Koch Brothers gave in the last cycle.

Last week, one of NRECA’s members, Mark Bailey, the president and CEO of Big Rivers Electric Corporation testified before Congress. Big Rivers is reliant on coal for a whopping 97 per cent of its electricity. He attacked the EPA’s moves to control pollution and carbon dioxide.

Bailey said: “I believe the future impact of the EPA’s proposed regulations will ultimately increase electric costs, could effect reliability, reduce employment and weaken the global  competitiveness of the American manufacturing industry. The combined environmental regulations will force us  and other electric utilities to decide whether to retire coal fired plants, switch fuels, or install  expensive control equipment to meet the environmental regulations.”

Scientists criticized the IREA for misrepresenting the scientific evidence of climate change in the fact sheet by attributing it to natural cycles and “the influences of plate tectonics.”

“There is clearly a well-organized and well-funded effort to undermine the science and cause confusion in the minds of the public,” said Kevin Trenberth, a climate scientist at the National Center for Atmospheric Research in Boulder, Colorado.