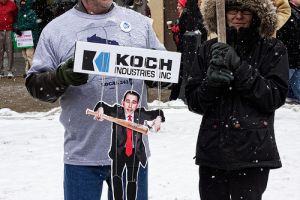 This is not looking so good. Firstly you have the multi-billionaire Koch Brothers, darlings of the Tea Party, who are the current cash providers for climate change denial industry.

And then you have the dirty Albertan tar sands where the oil is so much more carbon intensive to extract that it will help cook the climate if developed to the degree its proponents want to.

Now it looks like the Koch brothers are not content with undermining climate change by funding the denial lobby. They actually want to help develop the tar sands too and cook the climate directly.

Let’s not forget, the brothers are already involved in tar sands, indirectly. One of their businesses reportedly handles about 25% of tar sands imports into the US.

They are also one of the biggest refiners of Albertan tar sands. Their subsidiary, Flint Hills Resources, operates a Minnesota refinery that’s capable of processing 320,000 barrels of crude a day, about four-fifths of which is sourced from Alberta.

But now it looks like they want to get their dirty hands on the tar sands directly.

According to the Edmonton Journal, the brothers have registered to lobby the Alberta government.

The registry shows that on March 15, Koch Industries signed up to lobby the province on energy and resource development policy issues, as well as taxation and economic development.

In response to press inquiries, Koch Industries did not come clean about what it hopes to achieve by lobbying the government, but released a one-sentence statement. “Koch companies want to add value by providing quality services and products our customers desire and value in a way that is compliant with all laws and regulations.”

Calgary-based lobbyist David Keto of Global Public Affairs has been hired to arrange meetings and conduct grassroots and informal communications on behalf of the company.

Pettipas used to work for now-defunct Astroturf group the Canadian Coalition for Responsible Environmental Solutions from October 2002 through April 2004.  CCRES claimed to be a grassroots group of business, industry and consumer advocacy groups.

So maybe we will see a whole bunch of Astroturf groups springing up, talking about how extracting tar sands will be good for the climate.