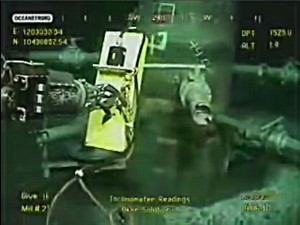 One of the final puzzles of the Deepwater Horizon disaster has been solved. It is a mystery no more.

A question that continues to haunt many in BP and in the oil industry is why did the supposed fail-safe mechanism to prevent a blowout, called the blowout preventer (BOP), actually fail. And fail so spectacularly.

The official answer came yesterday when the Norwegian company Det Norske Veritas who had been commissioned by the US Government to examine the issue, published their lengthy report into the matter.

It concluded that the violent surge of oil and gas up the well caused the drillpipe to buckle. This is turn meant that a bit of drillpipe blocked the so-called blind shear rams within the BOP, the blades designed to close on the drillpipe, from working properly .

“As the blind shear rams closed, a portion of the drill pipe cross section became trapped between the ram block faces, preventing the blocks from fully closing and sealing,” said the 551-page report.

The Washington Post argues that DNV’s findings would be seen as “alarming” by the industry’s critics.

The paper quotes an engineer who assisted in the prope, but spoke on the condition of anonymity. The “blowout preventer is a misnomer,” said the engineer. “People have been thinking of this as a fail-safe device, and it’s more of an operating device.”

So, this is quite interesting. For nearly a year, the industry and its allies have been saying that the BOP’s are a fail-safe device, which somehow went wrong. But actually we find out that they are not a fail-safe device at all. The major safety mechanism for stopping a blow-oput has a major design flaw.

According to the Post: “This finding is likely to incite calls for caution in granting deepwater drilling permits just as the Obama administration has started to issue some again”.

The findings have certainly alarmed Rep. Edward J. Markey who said “This report calls into question whether oil industry claims about the effectiveness of blowout preventers are just a bunch of hot air … We cannot turn a blind eye to the fact that the blind shear rams did not seem to work.”

Markey is now calling for a “full review of every single blowout preventer used in United States waters, and revisit the designs of these supposed machines of last resort.”

And maybe it might be prudent if that review was not restricted to US waters.