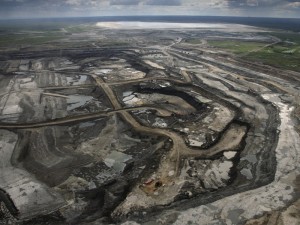 Two years ago the oil price hit the floor at $33 a barrel.

Today, on the back of the Libyan conflict, the price for Brent Crude is $116 a barrel.

Two years ago, development of the Canadian tar sands was stalling with many projects being put on hold.

According to the International Energy Agency, the international energy watchdog, in 2009 there were 15 planned developments in the tar sands that had been put on ice, as a result of the economic downturn and the collapse in the price of crude.

As Ed Crooks argues in today’s Financial Times: “The first has led to significant curbs on future supply of fossil fuels in the US; the second is likely to cause a significant increase in demand.”

But if you put all three together: the high oil price and the ongoing uncertainty of the Middle East, restrictions on deepwater drilling and questions over nuclear power, all of these start tipping the balance in favour of the tar sands, once again.

The big companies are beginning to invest again. Last week Shell announced it would invest $100 billion in new projects over the next few years. And key amongst them is the tar sands.

Once again, what a difference a year makes. A year ago, Peter Voser, the chief executive of Shell, said that the company’s expansion in the tar sands would be “very much slower”, once its latest investment phase was over, as the group made a strategic shift away from high-cost “unconventional” oil.

Last week the very same Peter Voser said: “I think in the future we can add a lot of value to these heavy oil schemes with technology development”.

Shell Canada president and country chair Lorraine Mitchelmore said that the turmoil in the Middle East is a reminder that Canada already stands out as “the most stable, the most reliable and the most democratic of the world’s top 10 oil and gas producers” along with Norway. “That’s a distinct competitive advantage.”

After the Deepwater disaster, pro-tar sands politicians and industry tried to play the safety card. Now in the wake of the Middle East turmoil and Japanese nuclear meltdown, they are likely to play the safe and secure card.

The problem with the tar sands, though, is the elephant in the room, which the industry is ignoring and that is the high carbon and ecological cost of extracting the fuel.

And as the FT argues “with the economics looking more favourable” again, “environmental arguments may now return to the fore”.

Indeed they do, and this time the industry cannot ignore them.