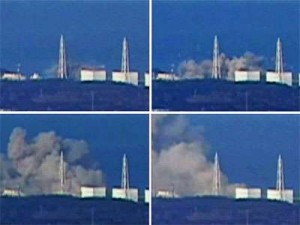 For the last two decades the nuclear industry has undertaken one of the most sophisticated public relations exercises in order to try and show the world that the technology is safe, secure, clean and green.

They have very nearly succeeded. We are on the cusp of a nuclear revival, driven largely because of climate change.

There have always been worries about nuclear safety, and what to do with the waste, but these concerns have been dismissed by the industry.

But in the wake of the on-going disaster in Japan it has been revealed that about 90 of the current 400 or so nuclear reactors in operation today are operating in areas of significant seismic activity, according to the World Nuclear Association.  So that is 22.5% of reactors potentially at risk.

In the US, for example, where the industry is hoping to build a new generation of reactors, there are four 1980s-vintage reactors at two sites in California, one to the north and one to the south of Los Angeles. And they lie on a very active fault line.

Although the authorities will claim that the risk of seismic activity was apparently taken into consideration in the design phase, Wikileaks has reported that Japan was warned about its nuclear plants.

Over two years ago, the international nuclear watchdog  – the International Atomic Energy Agency (IAEA) – warned Japan that its nuclear power plants were not capable of withstanding powerful earthquakes.

An official from the IAEA said in December 2008 that safety rules were out of date and strong earthquakes would pose a “serious problem”.

The document states: “He [the IAEA official] explained that safety guides for seismic safety have only been revised three times in the last 35 years and that the IAEA is now re-examining them. Also, the presenter noted recent earthquakes in some cases have exceeded the design basis for some nuclear plants, and that this is a serious problem that is now driving seismic safety work.”

Warnings about Japan’s nuclear power plants was also raised at the G8’s Nuclear Safety and Security Group in Tokyo in 2008.

But it is not as if the industry had not been warned before. The New York Times reports this morning that as far back as the early seventies, the design of these reactors had been criticised, especially in relation to the cooling systems.

As far back as 1972, Stephen Hanauer, a safety official with the Atomic Energy Commission, recommended that the Mark 1 system – the type used in Japan – be discontinued because it presented unacceptable safety risks.

In the mid-nineties questions were reignited, when Harold Denton, an official with the Nuclear Regulatory Commission, asserted that Mark 1 reactors had a 90 per cent probability of bursting should the fuel rods overheat and melt in an accident.

Because these warnings were ignored, the Japanese disaster may put the brake on the industry revival – for now at least.

The Guardian quotes  Clare Brook, fund manager of leading green investment group WHEB, in London saying “This tragedy comes on top of the oil price rise, the BP disaster in the Gulf of Mexico and unrest in the Middle East, all of which has made renewables more attractive. We would expect investment in renewables, especially solar, to increase. Nuclear has become politically unacceptable.”