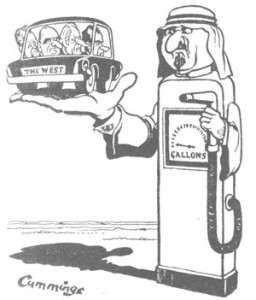 Many people are now getting jittery about Saudi Arabia.

Protesters in the Kingdom have called for a “day of rage” his Friday to show their dissatisfaction with King Abdullah’s regime.

Meanwhile the King has tried to head off serious unrest in the country by pledging to boost spending on housing, social welfare and education. And of course he has banned the protests.

Everyone knows that if protests kickoff in the Kingdom then it will be chaos. Bob Gray, Managing Director of Exploration and Production at Simmons & Company International, one of the most respected oil banking companies in the world, argues that “For the global economic situation, if there is a major political uprising in Saudi Arabia, that’s just about as bad as it could be.”

Saudi Arabia is one of the few countries able to increase supply to cope with decreased production elsewhere.

But the blogosphere and press is alive with speculation as to whether Saudi really can sustain an increase in production.

One way it is doing it is building strategic reserves in the short-term. Yesterday, in interview with the official Saudi Press Agency, Ali Naimi, Saudi Arabia’s oil minister, said Riyadh was now “storing additional quantities of crude oil at various storage facilities”.

Stockpiles are being built in Egypt, Rotterdam and Japan in the words of the oil minister to  “better meet any additional call on its production”.

The FT reports that “The build-up in inventories will act as a cushion against any potential supply disruption because the oil will be nearer the main customers.”

But how big a cushion is it and how long can it last?

Stockpiles will help in the short-term, but the only way OPEC can stop the market from spiralling is by increasing production, via spare capacity.

Some oil analysts believe that Saudi Arabia and OPEC don’t actually have that much spare capacity to increase production.

“We believe that OPEC spare capacity has already dropped below 2m bpd. The question therefore arises how much spare capacity is left to absorb potential supply disruptions in other countries,” argues Jeff Currie, from Goldman Sachs.

Chris Skrebowski, editor of Petroleum Review, even goes as far as arguing that. “We cling to the comfort blanket that spare capacity exists, but it is mostly fictional, or inoperable. If you take 2m bpd off the figure, the whole dynamic of global oil supply changes”.

And if the comfort blanket is fictional, we are all in trouble.