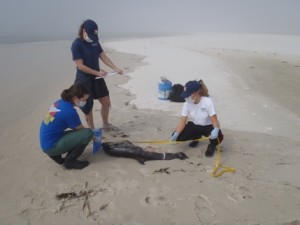 The permit for Noble Energy to drill about 70 miles southeast of Venice, Florida, comes more than four months after the Interior Department lifted its deep-water drilling moratorium, and nearly a year after the disaster.

“This permit represents a significant milestone for us and for the offshore oil and gas industry, and is an important step towards safely developing deepwater energy supplies offshore,” said Michael Bromwich, director of the Bureau of Ocean Energy Management, Regulation and Enforcement.

He continued “This permit was issued for one simple reason: The operator successfully demonstrated that it can drill its deepwater well safely and that it is capable of containing a subsea blowout if it were to occur.”

The permit approval comes with the Obama administration under intense pressure from the Republicans and the industry to approve more deepwater drilling permits.

Just days ago, Exxon urged regulators to allow deepwater drilling to resume in the Gulf of Mexico, citing the turmoil in north Africa as a reason to carry on drilling.

Ken Cohen, Exxon’s vice-president for public affairs, said: “We are the only part of the world that put its industry on standby after the spill. The industry has given every assurance that it can operate safely.”

Shell has also said in a statement: “While it is encouraging that the industry now has a green light to resume previously approved drilling operations in the deepwater Gulf of Mexico, we are hopeful this positive momentum will drive forward much-needed, new exploratory drilling in a timely manner.’’

But this new push for drilling comes as further impacts of the spill last year have surfaced. The recent discovery of more than 80 dead dolphins in the Gulf of Mexico is raising fresh concerns about the effect on sea life from last year’s spill.

The remains of 77 animals, which are nearly all bottlenose dolphins, have been discovered on 200 miles of coastline along the coasts of Louisiana, Mississippi and Alabama.

This figure is more than 10 times the number normally found washed up around this time of year, which is the crucial calving season for dolphins in the region.

“The number of baby dolphins washing ashore now is new and something we are very concerned about,” says NOAA spokeswoman Blair Mase. She said that the agency had declared the alarming cluster of deaths “an unusual mortality event”, adding: “Because of this declaration, many resources are expected to be allocated to investigating this.”

The Institute of Marine Mammal Studies in Gulfport, Mississippi, has been asked to examine the dead animals. “We are on high alert here,” said Moby Solangi, the institute’s director. “When we see something strange like this happen to a large group of dolphins, which are at the top of the food chain, it tells us the rest of the food chain is affected.”

Furthermore the National Institute for Environmental Health has announced it has begun enrolling participants for the largest study ever of impacts of the Deepwater spill on health.

Dale Sandler, the chief of the Institute’s Epidemiology branch, said “We’re looking at a wide range of health impacts. We’ve seen a whole series of things that started at the time of the oil spill. We’ll be looking at dizziness, watering eyes and, people who feel sick all the time since the spill”.

Recently some residents along the Gulf Coast have started going public with their health problems.  One resident sent a letter to her local newspaper complaining that  “I have seen doctors about stomach issues, sore throats, lethargy, brain fog, muscle soreness (and) digestive issues”

The resident argued that she said test results indicate she has “toxic levels of five separate toxins associated with the oil spill and the dispersant that was used afterward.”

Some could argue that it might be prudent to see just how many people and how much wildlife has been affected by the spill before issuing a new round of drilling permits.

Its called the precautionary principle.