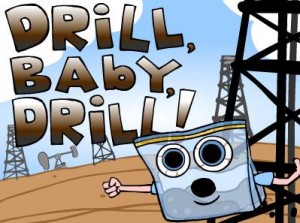 Domestic drilling may help Americans feel like something’s being done about energy security but it won’t protect the economy from oil shocks one bit. At least not until serious inroads are made into reducing oil demand. With 3% of the world’s oil reserves and 22% of global demand, concentrating on supply is clearly a losing game. Eating into the reserve quicker can only exacerbate the problem.

Further, expecting an increasing reliance on Canadian tar sands to somehow insulate the U.S. from the global oil market is equally naïve. The Keystone XL (tar sands) pipeline, which still awaits approval from the State Department, will not make the U.S. any less vulnerable to supply shocks. It’s a global market and everyone is affected when a significant chunk of the world’s supply is disrupted. Canada is already the biggest source of U.S. oil imports, yet Libya’s oil shutdown raised the price of oil in America (WTI) some $6 (6%) just yesterday.  If the Libyan crisis is prolonged and if the wave of unrest infects other big oil exporters (and that’s a big if in the case of Saudi Arabia – although some signs are emerging), we could be moving into a prolonged period of extreme oil price volatility and worse.

With such a significant proportion of global oil demand and so few domestic resources the U.S. will always be vulnerable and is going to feel this next wave sharply. In the long term, U.S. and Canadian production will only ever knock a percentage point here and there off of America’s overall vulnerability as long as demand remains so far away from even the highest estimates of local production capacity. The American Petroleum Institute’s recent claim, dubious as it is, that U.S. production could be 2.8 million barrels a day (Mb/d) higher in 2025 if all areas of the U.S. were opened to drilling is not really much help when according to the EIA, demand could grow 3 Mb/d to 22 Mb/d by 2035 if we don’t implement efficiency measures. This is the EIA’s current Reference Scenario. The API’s plan doesn’t even cover the demand growth while threatening America’s coastlines and wilderness areas with the specter of more large oil spills, and in the case of onshore production, habitat destruction and water pollution.

It’s not even as if domestic production or Canadian production maintains any spare capacity to help out in times of emergency. Oil production in both countries is carried out by private companies mandated to maximize profits to shareholders. As a result, oil production from these sources is designed to pump at full capacity in order to repay capital and generate profits as quickly as possible. What’s more the complex nature of Canadian tar sands production and domestic offshore production that is carried out in ever deeper water is such that most projects take several years to construct and bring into production. Hardly a safety valve for an oil dependent economy.

What the dirty energy politicians choose not to see is that U.S. oil demand can be brought down significantly, stabilizing oil prices and reducing America’s vulnerability to oil shocks long before “drill here, drill now would have any discernible effect.

A host of organizations have begun to show how this could be done.  The NRDC suggests that U.S. oil demand could be slashed 50% by 2030. Senator Merkley of Oregon released a study that concluded that it could be around 44% by then. And the Rocky Mountain Institute in cahoots with the Pentagon suggests that America could be oil free by 2050.

And as that last example demonstrates, it’s not just from environmental NGOs that advocate the demand solution over vainly increasing supply.  A significant caucus from the U.S military establishment, including senior generals, army personnel and veterans support this solution too.

On the face of it, the White House and the DoE are all for prioritizing efficiency and demand solutions over supply too. Why don’t we see enough action? Ask your Congress person who funds their election campaigns and you’ll start to see what’s jamming up the system here. Just a glance at the House Natural Resource Committee chairman Doc Hastings’s (R-WA) funding record will give you some idea.

If we want to see progress on energy security not to mention climate change, we have to get the Dirty Energy Money out of Congress. And if the current Middle East crisis is anything to go by, we need to do it – like yesterday.