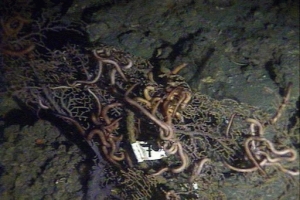 Do you remember when last August that the US government announced that seventy-five per cent of the oil from BP’s Deepwater disaster had miraculously “disappeared”?

This led to a plethora of press reports and blog posts that the ecological effects of the disaster had been over-exaggerated.

At the time Samantha Joye, a marine scientist at the University of Georgia who has been leading some of the most important research on the Deepwater Horizon spill, expressed caution. She said:

“A lot of this is based on modeling and extrapolation and very generous assumptions. If an academic scientist put something like this out there, it would get torpedoed into a billion pieces.”

At the weekend, Professor Joye told the American Association for the Advancement of Science conference in Washington that it may be a decade before the full effects on the Gulf are apparent.

Joye presented video footage that shows that within 40 miles of the damaged wellhead, there are oil deposits ranging from little spots of oil on the seafloor to localized blankets of goopy hydrocarbons several inches thick.

Some globules of oil had been found up to 100 miles from the source of the leak.

Joye said studies using a submersible had found a layer, as much as 10cm thick in places, of dead animals and oil in the region called the benthos.

“The impact on the benthos was devastating,” she told BBC News. “Filter-feeding organisms, invertebrate worms, corals, sea fans – all of those were substantially impacted – and by impacted, I mean essentially killed.”

That layer was so devoid of living animals that Joye called it an “invertebrate graveyard.”

“Another critical point is that detrital feeders like sea cucumbers, brittle stars that wander around the bottom, I didn’t see a living (sea cucumber) around on any of the wellhead dives. They’re typically everywhere, and we saw none.”

If you knock out the smaller micro-organisms that will eventually impact the food-chain, including fisheries. “I think it’s going to be 2012 before we begin to really see the fisheries implications and repercussions from this.”

She disputed an assessment by BP’s compensation fund that the Gulf of Mexico will recover by the end of 2012.

Finally, at 11 am EST today Live @ AAAS will host a live chat with Samantha Joye. For those interested click here.