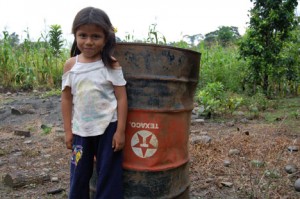 In an historic victory, a small court in Lago Agrio, in Ecuador’s Amazon has ordered that Chevron  pay some $8.6 billion in damages.

The court ruled in favour of the indigenous peoples of the Amazon who have spent the last 18 years seeking damages for systematic and chronic oil pollution.

Chevron inherited the suit when it bought Texaco in 2001, and has consistently denied the allegations of environmental damage.

At one stage the 18-year law suit had threatened to be the biggest in history, with damage estimates escalating from $27bn to $113bn, but the plaintiffs were finally awarded $8.6 billion.

Judge Nicholas Zambrano handed down a 187-page ruling that split the damages between $6.4bn for soil and water clean-up and $2.2bn for local healthcare.

Pablo Fajardo, the lead Ecuadorian lawyer for the plaintiffs said the judgement was “a great step that we have made towards the crystallisation of justice”, but added the fine was too small – far below the $27.3bn sought by the plaintiffs – and they may appeal.

He added that his team would now “take whatever actions appropriate” and “consistent with the law” to press for payment.

The judgement is being seen as historic. Amazon Watch and Rainforest Action Network, who have spent years working to help the Ecuadorian people and protect the Amazon, responded to the news “As of today, Chevron’s guilt for extensive oil contamination in the Amazon rainforest is official. It is time Chevron takes responsibility for these environmental and public health damages, which they have fought for the past 18 years.”

They added: “Chevron has spent the last 18 years waging unprecedented public relations and lobbying campaigns to avoid cleaning up the environmental and public health catastrophe it left in the Amazon rainforest. Today’s guilty verdict sends a loud and clear message: It is time Chevron clean up its disastrous mess in Ecuador.”

However, this is no means the end of the matter, and the US oil company is not going to be cleaning up the Amazon any time soon.

Yesterday, Chevron retaliated that the ruling by the court was “illegitimate” and “unenforceable in any court that observes the rule of law.” It has vowed to appeal.

“It has always been part of the plaintiffs’ lawyers’ plan to inflate the damage claims and have the court issue a smaller judgment so that their award appears reasonable,” said Kent Robertson, a spokesman for Chevron.

The case is being watch by many indigenous groups as well as investors. “This ruling is an intermediate step. The appeals could go on for many years,” said John van Schaik, oil analyst at Medley Global Advisors in New York.

“But the fact that the Lago Agrio court ruled in favor of the plaintiffs sends a signal to oil companies that, more than ever, they need to be good corporate citizens,” he added.

Ironically Chevron’s share price actually rose 1.3 per cent on the news, meaning that investors believe that Chevron will never pay.

Other recent judgements have gone in the company’s favour too: Last week, Judge Lewis Kaplan of New York’s Southern District Court imposed a temporary restraining order on the plaintiffs’ US lawyers, effectively blocking enforcement of ruling against Chevron.

Also last week an international arbitration panel in The Hague ordered Ecuador to “take all measures at its disposal to suspend or cause to be suspended the enforcement or recognition within and without Ecuador of any judgment” against Chevron in the case.

Chevron had claimed that Ecuador was violating the terms of a 1997 trade pact with the US.

Indeed some analysts say the judgement will be unenforceable as Chevron no longer has any refineries, storage terminals, oil wells or other properties in Ecuador that could be seized to pressure the company to pay.

So Chevron may be guilty, but it might walk away scot-free. The only winners will be the lawyers.