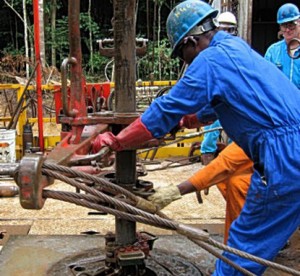 Tullow Oil is “approaching the finishing line” in talks with the Ugandan government to resolve a tax dispute that has held up plans to bring in new partners to exploit its oil reserves there.

Tullow expects to reach an agreement to sell a share of its Uganda assets to Total SA and China National Offshore Oil Company soon after the Ugandan elections next month.

“We’ve nailed down all the main points,” in a legally binding memorandum of understanding to resolve the dispute, Tullow’s Chief Executive Aidan Heavey told the press.

That deal has been delayed because of a dispute between the Ugandan government and Tullow’s former partner, Heritage Oil, over capital gains tax.

Last month, Wikileaks published a dispatch about Tullow Oil and its former partner Heritage.  It concerned a meeting between Tullow Vice President for Africa Tim O’Hanlon  and the US Ambassador to Uganda Jerry Lanier.

Written on 17 December 2009, it said that “the recent effort by Heritage Oil and Gas to sell its oil exploration and production license to ENI was apparently a corrupt back door deal”.

The dispatch noted that “If Tullow’s allegations are true – and we believe they are – then this is a critical moment for Uganda’s nascent oil sector. The Heritage-ENI sale will likely derail any potential partnership between Tullow and Exxon Mobil and have profound consequences for transparency and openness in the future management of the industry.”

The dispatch finished by saying that Tullow had asked “the U.S. to help bring these corruption allegations to light and raise concerns – perhaps in concert with the British High Commissioner or other development partners – over how the Heritage-ENI sale has transpired.”

After the Wikileak was published, ENI reacted furiously. According to the Ugandan press, Eni denied the “serious allegations” which it said, “are completely without foundation and has instructed its lawyers to initiate legal proceedings to compensate for any damage caused.”

Paolo Scaroni, the Eni’s boss, added “Eni intends to pursue tough measures, legal and otherwise, to ensure these allegations are proven to be what they are – a cynical use of lies to enhance one’s own company’s (Tullow) interest with little to no respect to integrity and ethical conduct of business for which Eni is proud of.”

O’Hanlon was forced to deny that he had made the remarks: “At no time did I give any credence to these rumours and would therefore dispute the record of our conversation as detailed by WikiLeaks,” O’Hanlon said.

Taimour Lay, a former researcher at PLATFORM in Uganda, who has investigated the oil industry, there, saw it very differently.

“The leaked cable only provides a first, partial picture of how companies and governments are colluding at Lake Albert to enrich themselves and the lengths oil executives will go to in order to secure contracts. “

He continued: “Many other examples of corruption are well known to local journalists and communities at Lake Albert but cannot be proved without tracing the money or catching intermediaries red-handed. In many cases, evidence will only emerge much later, or when particular politicians and companies fall out of favour. But we are already getting glimpses of the dirty deals and dishonest politics that lie behind the promises and public relations.”