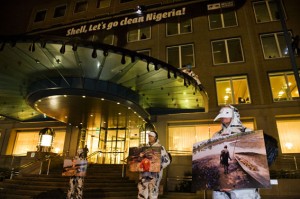 Just before dawn yesterday, activists from Friends of the Earth in the Netherlands scaled the front of Shell’s headquarters in the Hague and urged the company to “clean up” its operations in Nigeria.

The action was timed to coincide with a groundbreaking Dutch parliamentary commission meeting into Shell’s operations in Nigeria.

During the hearing Shell officials faced tough questions from Dutch lawmakers over its appalling pollution record in the country.

The meeting was organised by the Economic Affairs Committee of the lower house of Dutch Parliament.

It came a day after Friends of the Earth and Amnesty International lodged a complaint with Dutch officials of the Organization for Economic Cooperation and Development, accusing Shell of “nontransparent, inconsistent and misleading figures” on the causes of the oil leaks.

Last year, Friends of the Earth and four Niger Delta residents also filed a civil suit in The Hague against the oil giant for alleged negligence in cleaning oil spills.

Both FoE, Amnesty and many other NGOs and communities on the ground in Nigeria argue that Shell understates its responsibility for spills to reduce its legal liability.

They argue that as much as 9 million barrels of oil have been spilt in Nigeria since oil exploration began in the 1950s.

Shell as usual tried to shift the blame away from the company.

Ian Craig, Shell’s executive vice president for sub-Saharan Africa, countered that 70 percent of oil spills over the last five years were caused by sabotage or by “bunkering”.

But, as I have pointed out on this blog many times before, this 70 per cent figure is widely disputed.

And as the Nigerian Vanguard newspaper points out this morning this is the second time in two years that Shell “has been forced to modify the cause of oil spill in its areas of operations in the Niger Delta.”

The paper points out that until recently Shell was claiming that 98 per cent of spills were caused by sabotage.

Two years ago, in 2009, Shell was also compelled to correct misleading information regarding the cause of oil spills. “After repeatedly claiming that 85 per cent of all oil spills in 2008 were caused by sabotage, it announced that the figure was closer to 50 per cent. Neither the claims of 85 per cent or 50 per cent have been properly explained.”

During the hearing, Shell was also accused of abusing human rights, failing to clean up oil spills and stop flaring gas from about 100 wells.

Environmental abuse and Shell’s failure to clean up the mess led to “widespread human rights violations,” including the right to food, clean water, livelihood and good health, said Audrey Gaughran, from Amnesty issues.