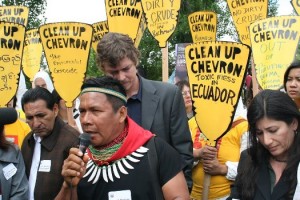 In many ways it has been a lengthy legal fight like no other.

On the one side are tens of thousands of poor Ecuadorian Indians and on the other the raw might of American Big Oil, in the shape of Texaco and then Chevron.

In the middle is a chronically polluted Amazon and the lega lfight as to who is to blame for the devastation.

But now seventeen years into this monumental legal case, lawyers representing the Ecuadorians have finally filed the opening part of their final arguments in the case.

It is finally the beginning of the end.

Their 116-page document was submitted to the judge presiding over the trial in the Amazonian town of Lago Agrio.

It outlines in detail the case against Chevron, which plaintiff lawyers calls “overwhelming and unassailable” evidence demonstrating Chevron’s liability in the $113 billion environmental damages lawsuit and the “fraud” behind the company’s primary defense of remediation.

Texaco started producing oil in the mid-sixties and was the sole operator in the region until 1990.

When it left, the company abandoned hundreds of toxic waste pits and widespread pollution through the rainforest region.

A law suit was filed against Texaco in 1994, and in 2001, Chevron absorbed Texaco – taking on liability for the company’s misconduct in the Amazon.

According to Karen Hinton, from the Amazon Defense Coalition, spokesperson for the plaintiffs, argues that the “voluminous scientific evidence” proves “overwhelmingly that Chevron is responsible for what is widely regarded as the world’s worst oil-related disaster.”

“These lax operational practices have had a devastating impact on the rainforest ecosystem and its inhabitants,” according to the document.

The plaintiff’s document – called an “alegato” – also found that “there is irrefutable evidence of contamination” at every one of Chevron’s 45 well and oil production sites inspected by the parties during the trial phase of the case in the affected area, which is 1,500 square miles in size and covers a swath of rainforest roughly the size of Rhode Island.

The chemicals and compounds found — all of which are toxic and some of which are known carcinogens —  include barium, benzene, cadmium, chromium, copper, etheylbenzene, polycyclic aromatic hydrocarbons, vanadium, xylene, and zinc.

“The evidence makes it clear and unmistakable that Chevron is guilty,” the summary concludes.

It expands on this guilt: “Guilty of polluting the rainforest with toxic sludge from lucrative oil drilling operations, guilty of a shoddy and haphazard cleanup operation, guilty of letting toxic waste continue to devastate the rainforest and its inhabitants’ lives, and perhaps worst of all, guilty of trying to cover it all up by destroying documents and making false accusations of fraud before courts in the U.S. and Ecuador.”

The time has come indeed. And not a second too soon.