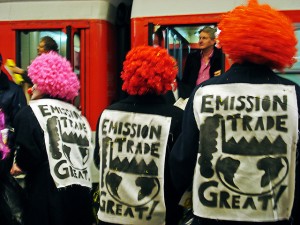 For a long time the concept of carbon trading has had its critics.

The primary one is that trading carbon does not really get rid of the problem: the emissions of carbon dioxide. It merely changes pollution into a commodity that can be traded.

As the NGO Carbontrade Watch argues: “Carbon offsets allow companies and countries to buy their way out of responsibility for cutting their own emissions with theoretical reductions elsewhere.”

The biggest trading regime in the world remains the EU’s ETS, which has also been criticised by Carbontrade Watch: “The EU Emissions Trading Scheme (EU ETS) has so far failed to reduce emissions, while the use of offset credits serves to conceal this lack of progress”, they argue.

The other problem is that the scheme has become a licence for polluting firms to make serious amounts of money. For many years, the carbon price has been far too low to be effective – in part because of the abundance of free allowances handed out in the ETS’ early years.

Many biggest polluters have made a small fortune from these allowance. The world’s biggest steel producer, Arcelor Mittal, has profited nicely from its lobbying efforts on the EU ETS.  Described as the ‘number one carbon fat cat’, ArcelorMittal has the potential to make over €1 billion profits from the scheme by 2012.

But the EU ETS, has hit another snag. It seems it has become a licence to print money for criminals too.

So-called cyber-thieves have stolen as much as €30m in carbon allowances from the scheme, leading to the cessation of trading.

“There is no point in denying that this is a pretty big deal,”Henry Derwent, a carbon trade lobbyist and head of the International Emissions Trading Association in Brussels told the Financial Times.

Two days ago the European Commission, ordered spot trading in emissions allowances to be suspended for at least a week due to security breaches.

It seems the hackers simply got into the system and transferred credits to other accounts.

Keiron Allen, director of marketing for BlueNext’s, the market’s biggest exchange, said the market had been “battered by the scandal”.

Experts from the Commission and member states are expected to meet today to discuss the latest attacks.

Maybe they should just shut the whole scheme down permanently, save everyone some money, and end the charade that somehow they are benefitting the climate.