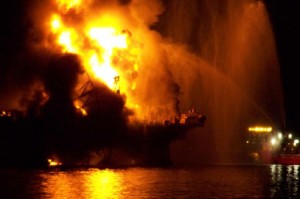 We already know that the official Commission into the Deepwater disaster criticised BP for systematic management failures.

But the Commission is set to criticise the Obama administration later today when the full and final report is launched at the National Press Club.

It will argue that the Administration has not gone far enough to reform the oil industry after the disaster, including building an “impenetrable wall” between the once cosy relationship regulators and industry.

The Commission will call for a sweeping overhaul of the offshore oil industry, including the setting up of a designated agency to oversee the safe operation of rigs and better trained inspectors.

It is expected to ask the Obama administration and Congress to bring the offshore oil industry in America in line with Norway and Britain in terms of its safety regulations and capabilities in case of an oil spill.

The Commission will also call for raising the current $75m (£48m) liability cap on oil companies. It will call for fines levied under the Clean Water Act to be used to restore fisheries and shorelines.

The commission is also expected to recommend more robust environmental reviews of proposed offshore drilling projects and additional study before the U.S. approves exploration in Arctic waters near Alaska.

It is also calling on reducing the size of lease sales to allow for better environmental oversight and to give more weight to scientific advice in government decisions about where to permit oil and gas leasing.

“The improvements in the Interior Department’s regulatory capability are, we believe, relatively modest,” co-chairman William K. Reilly said during a meeting in early December in which the panel’s staff outlined its recommended reforms. “And failure to upgrade the quality of federal regulation would be a national scandal.”

But after the scandal of the Deepwater disaster, there is not likely to be a national scandal in response to the lack of comprehensive and radical regulatory overhaul.

As the Houston Chronicle points out: “On Capitol Hill, lawmakers’ appetite for tougher offshore drilling laws has faded, along with the pictures of oil-covered birds. And a surge of freshman lawmakers elected on promises of spending cuts may be reluctant to boost funding for the Interior Department’s Bureau of Ocean Energy Management, Regulation and Enforcement, which regulates coastal drilling.”

So its worse than back to normal.

The oil industry’s new friends in charge of Congress will try and repeal or water down the laws that are necessary to make America’s coasts and oil rigs safer.

I hope as lawmakers they can look the families of the men who died on the Deepwater Horizon rig in the eye and say that they have done everything in their power to prevent another disaster.