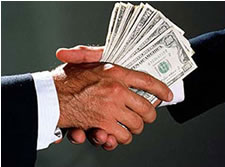 It is widely accepted that people give money to politicians to curry favour and buy influence.

So there will be no surprises that there are smug smiles on the faces of the oil and coal barons this week as the people they pay, the Republicans, begin their assault on climate legislation and environmental protection.

As the New York Times reports “The newly empowered Republicans in the House aren’t wasting any time making good on their pledge to throttle the Environmental Protection Agency.”

The Republicans are practically acting as paid advocates of the oil and coal industry. The fossil fuel industry hates the EPA and, hey presto, the Republicans first target is… the EPA.

Representative Darrell Issa, (funded by Edison International, Chevron, Exxon, Occidental, Valero, and a whole host of other oil companies and trade groups) and new chairman of the House Committee on Oversight and Government Reform, has even gone asked his lobbyist friends and trade organizations to identify which rules they want overturned. Its no surprise that the E.P.A.’s air quality regulations were high on the list.

In any other political jurisdiction there would be outrage that oil and coal-backed politicians are attacking key legislation that undermines their industries, but in America the concept passes like a ship in the night.

So its pay-back time and the fossil-fuel-backed politicians have wasted no time. On the first full day of legislative business, House Republicans introduced measures to try and block the EPA’s proposed regulation of greenhouse gases.

As the NRDC points out, the three House members (Marsha Blackburn, Ted Poe and Shelley Moore Capito) who were quickest to introduce bills to prevent the EPA from updating the Clean Air Act, are “also backed by some of the biggest names in pollution”.

If you go to OCI’s great site Dirty Energy Money you can see who funds this lot:

Capito has no qualms about attacking the EPA: “As I’ve learned first-hand, EPA Administrator Lisa Jackson is keenly committed to enforcing the Administration’s anti-coal agenda with no regard for the devastating effects on our local and national economies.  As a Member of Congress, I will do whatever I can to put a stop-gap on this power grab.”

But least some politicians are standing up to the political stooges of the fossil fuel industry:

“I will use every tool available to me as chairman of this committee and as senator from California to oppose any legislative effort that threatens the health, or safety, or well-being of the people of America. That includes his [Upton’s] desire to stop the Environmental Protection Agency from carrying out its responsibilities under the Clean Air Act.”