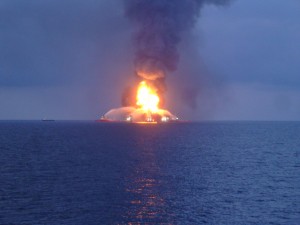 When you think of the Deepwater disaster earlier this year, of course the main company responsible for the spill that springs to mind is BP, the operator of the rig.

The next villain in the story is Transocean, the owner of the rig.

One name that does not automatically jump out is Anadarko, the minority share holder in the Macondo well, with a 25 per cent share (compared to BP’s 65 per cent).

It is the third villain in the story, or is it? Anadarko was due to profit handsomley from the drilling operation, so why should it not pay any of the costs?

Whereas BP has set aside significant funds – some $20 billion – to pay for costs from the spill, Anadarko is not setting aside any money to cover any liabilities.

It could be a high risk strategy.

The US Justice Department is expected to announce today that it will seek to join civil lawsuits stemming from the Deepwater disaster.

If this is the case, then it will be the first major federal legal action as a result of the spill.

According to the Wall Street Journal, The Justice Department is expected to join several civil lawsuits against BP as a way of gaining access to legal documents, which could be used in the government’s ongoing investigations.

By joining the private litigation, Justice Department lawyers are positioning themselves to play a major role in the coming litigation, including depositions of key witnesses.

This could assist the government’s continuing probe into the disaster which is aimed at building both a civil and criminal case against the companies involved, including potentially Anadarko.

In a Justice Department complaint, federal lawyers are expected to allege violations of environmental-protection regulations, which could trigger penalties under laws including the Clean Water Act and the Oil Pollution Act

But Anadarko refuses to accept any of the blame.

“Publicly available evidence indicates that the blow-out of the well, the explosion on the Deepwater Horizon drilling rig and the subsequent release of hydrocarbons were preventable and the direct result of BP’s decisions, omissions and actions, and likely constitute gross negligence or wilful misconduct by BP,’’ says Anadarko.

BP rejects that claim, and the matter will probably be another one settled by the courts.

Meanwhile, with its head in the sand over Deepwater liabilities, Anadarko is carrying on deepwater drilling.

Today the first oil will flow from its Jubilee field in Ghana, where the company has the rights to some 7 million acres, spanning Ghana, Côte d’Ivoire, Liberia and Sierra Leone.

This is only one of a number of discoveries that are exciting the oil analysts. The company has also announced three significant natural gas finds off the coast of Mozambique and a substantial discovery off the coast of Brazil and promising results from drilling off the coast of Sierra Leone.

Credit Suisse says in a recent report: “We continue to believe Anadarko holds the deepest and most scalable asset portfolio amongst the independents.”

Let’s also not forget that Anadarko also has key positions in some of the largest shale fields in the US, which are subject to a huge on-going controversy over “fracking”.  See yesterday’s blog for more on this.

Such is the renewed optimism the company’s share-price has rebounded from Deepwater. After the disaster the share price plummeted to $34.54.

But no matter how many offshore discoveries Anadarko finds, it cannot escape the fact that analysts estimate the company will face $5bn-$10bn in potential liabilities from Deepwater.