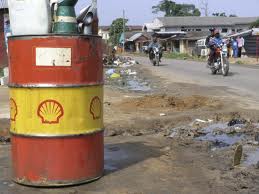 One of the main concerns of the Ogoni activist and writer, Ken Saro-Wiwa was the collusion between Shell and the Nigerian Government.

We already know that this collusion went from the top levels of the government to routine logistical and financial support for the military.

Saro-Wiwa once said that one of their protests was “anti-Shell, and anti-Nigerian government” because together they were in league to destroy his people. He did not see much difference between the two, because for him they were the same.

We have not heard the last yet of Shell’s insidious relationship with a brutal military regime that slaughtered, murdered and raped innocent civilians and you can expect more revelations on this blog and elsewhere.

But even Ken may have been shocked to see just how far Shell has infiltrated the Nigerian government.

Notes of a meeting between Anne Pickard from Shell and the American ambassador in the country are highly revealing.

Pickard said that the Government of Nigeria “had forgotten that Shell had seconded people to all the relevant ministries and that Shell consequently had access to everything that was being done in those ministries.”

On the issue of the new Nigerian Petroleum Industry Bill, there was “total alignment with the international oil companies at every level.”

In the section “looking ahead”, the Ambassador noted –something we all know  – is that Shell is more vulnerable to the vortex of violence that affects the Niger Delta as more of its operations are onsure.

In the event that violence “returns to the Delta, Shell can be expected to hurt the most and cry the loudest.”

The dispatch also includes an interesting snippet on gas flaring in the country. For years Shell has been under pressure to stop flaring and has missed deadline after deadline to postpone the practice, that is a massive source of greenhouse gas emissions.

It says “Pickard said the PIB [Petroleum Industry Bill] requires an end to gas flaring by 2010. She said the industry won’t be able to do that due to the lack of investment and security. Shell is ahead of the other IOCs and could be ready by 2011. Shell would have to spend $4 billion to do this, but the GON would also have to fund its part and that is a risk.”

It is also been well documented how important Nigeria not just to Shell but the Americans too. The Wikileaks disclosures contain another dispatch from February this year where the American Assistant Secretary of State Johnie Carson met with members of the International Oil Companies

The dispatch notes that “The A/S [Assistent Secretary] stressed the fact that Nigeria is the most important country in Africa for the United States”.

The growing conflict between American and China over Africa’s resources is also well documented. Carson told the oil companies that

“The United States does not consider China a military, security or intelligence threat. China is a very aggressive and pernicious economic competitor with no morals. China is not in Africa for altruistic reasons. China is in Africa for China primarily”.

Part of the reason that Nigeria is so important to both China and America is oil.

Carson bemoaned that the US no longer had a consulate in Port Harcourt:  “No presence means no access, which leads to no influence. Without influence you have nothing.”

Now he knows what many in the Niger Delta feel like.