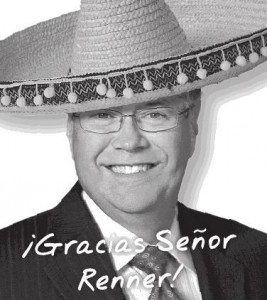 So its week two at the climate talks, when the heavyweights begin to arrive. Over the next few days, environment ministers, Prime Ministers and Presidents will all head to the Mexican resort of Cancun.

Due to arrive tomorrow is Albertan Environment Minister, Rob Renner, who will be greeted by a sarcastic “muchas gracias” newspaper adverts.

The ad in the Cancun paper Novedades de Quintana Roo features a picture of Renner in a sombrero with text that reads:

“As you join us in Cancun, we’d just like to say muchas gracias for all your work to keep the oil a-flowing from the tarsands in Canada. Subsidies, public relations campaigns and letting our pollution go up up up — what more could we ask for?”

The ad targeting Renner is part of a “Gracias Por Nada” campaign by Environmental Defence and the Canadian Youth Climate Coalition.

The tongue-in-cheek campaign is using a mock oil front group called the “Canadian Alliance of Petroleum Peddlers” to “thank” 16 delegates for doing nothing to prevent climate change.

Gillian McEachern from Environmental Defence says “When Minister Renner arrives in Cancun, we’ll be running a full page ad in the main newspaper in the region,” McEachern says. “(It’s) him, with a sombrero ”photo-shopped” on. (The) premise is, that this mock oil association (CAPP) is thanking him for doing nothing to fight global warming.”

Matt Price, campaign director, adds that the ad is obviously meant as tongue-in-cheek. “Everyone else in that room in Cancun is there to reduce emissions, but the minister is proposing to increase greenhouse gas pollution, which is a bit of a contradiction to what the conference is about,” said Price. “The story is already out that Canada is not good at reducing greenhouse gas pollution.”

In a statement on the Alberta environment website, Renner said he is attending the conference to “talk about Alberta’s challenges, successes and the importance of our energy resource to Canadians.”

Meanwhile Canada says it wants to kill the Kyoto Protocol, at least in its current form.

Canada remains the only country to ratify Kyoto and then publicly renounce its 2012 emission targets – a move the Harper government took almost immediately after taking office.

The Conservatives – whom Harper heads – killed an opposition-supported climate bill in the Senate that would have required the government to reduce emissions to 25 per cent below 1990 levels by 2020 – essentially putting Canada on a Kyoto track.

But Harper has provided himself political room by hitching his policy to action in the United States. “The brilliant political ploy of ‘waiting for Obama’ gives the Harperites political cover,” argues Elizabeth May from the Canadian Greens.