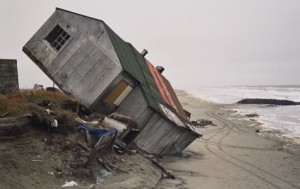 According to a new report by one of the world’s leading authorities on climate change, the UK Met Office, the world has warmed more rapidly than previously thought over the past decade.

The report also finds evidence that man-made climate change has grown even stronger over the last year.

This means that this year is heading to be the hottest or second hottest on record, with it being the warmest recorded by Nasa, and are second in the UK data set, HadCRUT3.

The Met Office marshalled the latest data from nine indicators to show that global temperatures had risen over the past decade. The indicators range from decreasing sea ice and snow cover to increasing atmospheric humidity.

“It is clear from the observational evidence across a wide range of indicators that the world is warming,” said Matt Palmer, a senior scientist at the Met Office. “As well as a clear increase in air temperature observed above both land and sea, we see observations which are all consistent with increasing greenhouse gases.”

The Met Office has also confirmed that the rate of warming has slowed – but maintains that is due to natural variability – not because man-made warming has stopped. Although the Met concedes that climate sceptics will seize on this data.

The Met think factors in the slower warming may be natural variation in the chaotic climate system; a natural downturn in solar radiation; a small reduction in water vapour in the stratosphere; a possible increase in aerosol emissions from Asia; and the fact that strong warming in the Arctic is poorly represented in the way data is collected.

Dr Vicky Pope from the Met Office says the slowdown in temperature rise is consistent with projections from climate models. She also says she expects warming to increase in the next few years.

“There are a number of things that are affecting short-term temperatures. A lot of the heat could be distributed to the deep oceans and we don’t know what’s going on there.”

But some experts are betting 2010 will be the be the joint hottest ever.

“I would not be surprised if most or all groups found that 2010 was tied for the warmest year,” said Nasa’s Dr James Hansen.

But for the final say on the world we will have to wait until next week, when the World Meteorological Organisation, will reveal what the 2010 temperature record was, as it records all the temperature measurements in its estimation.

And next week sees the start of the Cancun climate meeting..