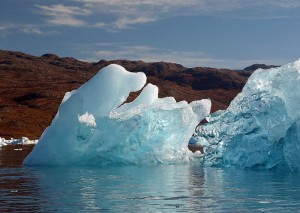 Just over a year ago, the Climategate scandal rocked climate science to its core. The scandal damaged the Copenhagen climate talks and has been fodder for the sceptics ever since.

A year on, and the scientist at the centre of the row, Professor Phil Jones, argues that it will take a long time to convince the sceptics that climate change is happening.

“I don’t know how long it’s going to take. It’s potentially going to take years,” he said in an interview recently, adding that he thought most people would be persuaded when the Arctic became ice-free in summer.

But its not so much as the Arctic becoming ice free in the Summer that is disturbing scientists – it is rate at which the Arctic ice is melting on land that is the worry.

So a bold article in the New York Times in association with the Observer makes compelling reading. (The article is not available online)

Entitled “Rising seas, and a looming catastrophe” the article examines the highly contentious topic of “how fast is the world’s ice going to melt?”

The article says that “researchers have recently been startled to see big changes unfold in both Greenland and Antarctica”.

It continues: “Climate scientists worry that extensive melting of land ice may become inevitable before political leasers find a way to limit heat-trapping gases and before scientists even realise such a point of no return has been passed”.

It says that recent scientific calculations suggest that sea-level rise could be one metre or even conceivably exceed 1.8 metres by the end of the Century. This may be an overestimate. It may be an underestimate.

But one thing is certain. What the scientists on the ground are seeing is alarming. “The things I’ve seen in Greenland in the last five years are alarming” says Gordon Hamilton of the University of Maine. “We see ice-sheets changing literally overnight”.

Over the last decade the flow rate of some of Greenland’s largest glaciers has doubled or even trebled. “All these changes are happening at a far faster pace than we would have ever predicted from our conventional theories”, adds Hamilton.

And the seas will not stop melting in 2100. “Beyond a 100 years out, it starts to look really challenging” argues Richard Alley, a climate scientist at Pennsylvania State University “You start thinking about every coastal city on the planet hiding behind a wall, with storms coming”.