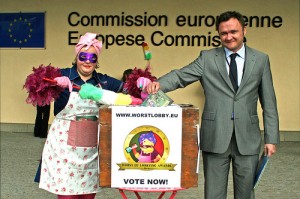 It’s that time of year again.

Over in Europe, a coalition of NGOs is running the “Worst EU Lobbying Awards” and one of the categories for this year’s award is “climate”.

There are three nominees for companies and organisations who are the worst offenders when it comes to undermining action on climate change. To vote go here.

The steel industry fat cat, is nominated for lobbying on CO2 cuts under the Emissions Trading Scheme (ETS), whilst raking in windfall profits under the EU ETS at the same time.

ArcelorMittal is the world’s largest private steel company and makes 10 per cent of the world’s steel. It is also one of Europe’s bigger CO2 polluters.

Yet ArcelorMittal fought EU requirements under the Emissions Trading Scheme (ETS – the world’s largest carbon market), lobbying to secure free permits to pollute, allowing it to continue with business as usual, with permits to spare.

The steel giant, whose chief executive is Lakshmi Mittal, Britain’s richest man, lobbied the EU Commission and member state governments opposing the proposal for auctioning of permits (as opposed to the free supply which the steel industry and others have now successfully lobbied for).

Directors of Arcelor Mittal Bremen claimed to the European Commssioner in 2008 that the steel industry would be compelled to move steel production out of Europe.

Now ArcelorMittal and industry body Eurofer have persuaded the EU Commission to continue subsidising Europe’s worst polluters who will continue to get free permits until 2020 at least.

The world’s biggest steel producer has profited nicely from its lobbying efforts.  In 2008-2009 it held more than 50 million surplus EU allowances which it received free of charge – all of which it can sell to other companies or bank for future use.

Described as the ‘number one carbon fat cat’, ArcelorMittal has the potential to make over €1 billion profits from the scheme by 2012.

Whilst BusinessEurope is not a household name in Washington, over in Brussels it is a lobbying powerhouse. It is nominated for its aggressive lobbying to block effective climate action in the EU while claiming to support action to protect the climate.

BusinessEurope claims to support the need to stop man-made climate change yet has effectively undermined EU plans to cut CO2 emissions. Claiming to represent the interest of the European business community to the European institutions, it has lobbied in the interest of the most energy-intensive industries, such as oil, steel and chemicals, blocking effective climate policies at the EU level.

BusinessEurope is “the voice of business in Brussels”, and claims to support the EU’s climate ambitions and a shift to an efficient low-carbon economy. Yet it has led industry efforts to block EU ambitions to raise the CO2 reduction target to 30%.

BusinessEurope has worked with sister-organisations, the Alliance for a Competitive European Industry (ACEI) and the Alliance of Energy Intensive Industries to defend the energy-intensive sectors that need to do most to adapt to a 30% cut – such as chemical industry group (CEFIC), iron and steel (Eurofer) and cement (CEMBUREAU).

BusinessEurope lobbying created a lot of hype about the threat of widespread job losses across Europe and ‘carbon leakage’ (the increase in emissions outside a region as a direct result of the policy to cap emissions in the region).

Companies represented by BusinessEurope have worked to block climate regulation outside of Europe as well. When the EU announced it was considering a 30% target, BusinessEurope said that going beyond 20% “would send the wrong signal”.

Companies including Shell, Solvay, Bayer and BASF have tried, under their respective US business associations to oppose climate action in the US. As a result the EU has failed to move to 30%.

Energy company RWEnpower, the subsidiary of German energy giant RWE, likes to portray itself as green. RWE runs big budget advertising campaigns in Europe highlighting small model projects with green credentials.  It claims to be leader with its slogan “RWE – the energy to lead”.

But, in truth, RWE keeps pushing to keep its dirty coal and oil plants open.

RWE has been lobbying over two key pieces of EU legislation – the Large Combustion Plant Directive (LCPD) and the Industrial Emissions Directive (IED), that supersedes the LCPD and which was passed by the European Parliament in July 2010.

Both Directives are concerned with reducing key industrial pollutants, such as sulphur and nitrous oxides, although they indirectly impact carbon dioxide emissions too.

Such was the industry’s success at getting what they wanted that the head of the AEP, David Porter went from calling the IED “a scary example of bad regulation” in 2008, to saying in July 2010, that he was “content” with the Directive.

RWE also worked with energy suppliers and lobby groups in Europe to postpone the pollution controls.  One event in the European Parliament, for example, asked MEPs whether the Directive review was designed to “curb industrial emissions or EU industry?”

After the intense lobbying by UK energy companies, the EU backed down on its plans. Under the Directive, coal-fired power plants can avoid having to cut emissions if they promise to shut down altogether by the end of 2023, much later than originally proposed.

Even plants staying open were given three extra years to comply. This means the companies can keep their highly polluting “cash cows” running instead of investing in cleaner energy.

German liberal politician Holger Krahmer, who represented the European Parliament in the negotiations, described the opt-outs for coal-fired power plants as a “European tragedy”.