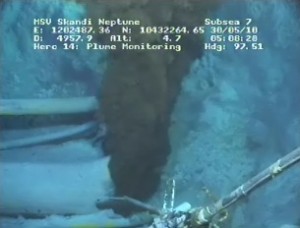 In another signal of the legacy of BP’s spill, it has emerged that “Spillcam” was one of the top words of 2010, reflecting the impact the spill had around the globe.

Along with words such as “vuvuzela”and Sarah Palin’s “Refudiate” — a morph of refute and repudiate – Spillcam made the annual Global Language Monitor survey.

The survey uses a math formula to track the frequency of words and phrases in the English-speaking world of more than 1.58 billion people, and Spillcam came out as one of the top words.

It is not surprising. During the height of the spill in the summer, people and the press were glued to the Spillcam images of oil billowing into the Gulf of Mexico.

The Spillcam revelation comes as the dispute on the impact of the spill continues.

The US National Oceanic and Atmospheric Administration (NOAA) said yesterday it had reopened more than 8,400 square miles of Gulf waters to recreational and commercial fishermen, leaving only a fraction of the area still closed because of the spill.

“This is the first reopening where we have added a supplemental test to detect dispersants in seafood, and all the samples passed,” said Jane Lubchenco, under secretary of Commerce for oceans and atmosphere and NOAA administrator.

“This is yet another indication that our Gulf seafood is safe for consumption,” Lubchenco continued.

But the fact that everything is safe and the has disappeared is a very different picture to other evidence.

Late last month the Christian Science Monitor reported that: “Oil is still being discovered along the shorelines of all four coastal states, even appearing in areas that were once cleaned, a frustrating situation caused by unpredictable tidal patterns.”

The fate of where the oil has gone was covered by Rocky Kistner, an ex-journalist working for the NRDC, yesterday.

He writes: “Complaints over claims payments isn’t the only gut-wrenching problem for residents down here. Many look out into the choppy Gulf waters and wonder what happened to the 200 million gallons of oil spewed into the sea. Is it largely gone like many government officials are saying? Could hydrocarbon-eating bacteria really be that ravenous? But many think much of the crude is still there, lurking on the bottom and rolling in with the tides. Science has yet to provide the answer and likely won’t for many months to come.”

Mistrust among residents and fishermen continues to rage. “I call it the immaculate deception,” says Louisiana Shrimp Association President Clint Guidry. “Nothing’s really changed here since the beginning as far as getting real information.”

And one of those areas about real information is the effect dispersants have. Ever since the spill occurred, this blog has argued that the excessive use of dispersants might be causing more harm than good.

Last week, an article in the Scientific journal, Nature, argued that “Dispersed oil from the Deepwater Horizon disaster could be more dangerous to wildlife than reports suggest.”