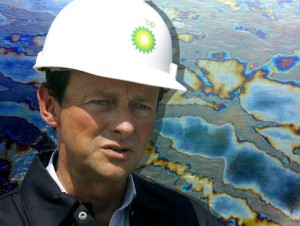 So finally we get a bit of humility and contrition from Tony Hayward, ex-CEO of BP.

Speaking for the first time since he resigned, Hayward has admitted that the Deepwater Horizon accident was BP’s fault, that he made mistakes and that BP was woefully unprepared for a disaster on this scale.

To this: “The emotion, anger and frustration was entirely understandable. The US administration had not created this mess. We had.” Tony Hayward speaking on the BBC last night.
Hayward made the admission in a programme last night, broadcast on the BBC. The ex-CEO, who was pilloried everywhere (including on this blog) for being gaffe-prone, did admit making mistakes in the aftermath of the disaster.  “Of course I regret some of the remarks that I made”.

While acknowledging his mistakes, he indicated that he still would have had to resign. “I’m not certain it would have changed the outcome, but certainly the perception of myself may have been different.”

He even said it would have been better if he had a degree in acting from “Rada rather than a degree in geology I may have done better” in handling the fallout.

Hayward also admits how close BP came to failing as it became a financial pariah.

“Prior to the meeting with the White House the capital markets were effectively closed to BP, we were not able to borrow in the capital markets, either short or medium term debt at all, ” he said. “It was a classic financial crisis issue. It wasn’t about the cash flow of the company it was about the liquidity.”

There is also a candid admission from Hayward about how badly BP were prepared for any spill. “BP’s contingency plans were inadequate. We were making it up day to day” he said.

Others interviewed were critical of BP’s safety record. The programme also heard John Hofmeister, the ex-President of Shell Oil, say that BP’s safety record in North America was an “embarrassment to the industry”.

“Without question BP’s safety record in North America compared to its competitors, is at the bottom. It’s an embarrassment to the industry” he added.

Indeed, one of the heads of the US presidential commission, William Reilly, said yesterday said that BP, Transocean and Halliburton, made “egregiously bad decisions” in the run up to the disaster and there “was not a culture of safety on that rig”.

“BP, Halliburton and Transocean are major, respected companies operating throughout the Gulf, and the evidence is that they are in need of top-to-bottom reform,” Mr Reilly added.

Let’s see if Bob Dudley can deliver on that reform.