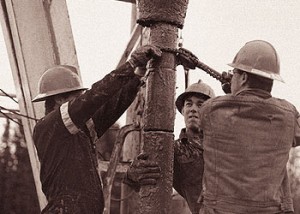 In the days after the BP oil spill, many environmentalists argued that the spill would be a “game-changer”, that it would facilitate the transition to a clean energy future.

But any new legislation that might have been introduced after the spill that placed stricter regulations on offshore drilling is not likely to come into force, with the new Republican majority.

As for quick-starting the renewable revlution; well forget it.

Henry Waxman and his sub-committee chair Edward Markey will soon be gone and so BP can rest easy. Its business as usual for the oil and gas boys.

Henry Waxman was also known to be against the expansion of shale gas due to the dangers of hydraulic fracking. However with him gone it will be full steam ahead. Literally.

And with President Obama’s new found enthusiasm for shale gas, this spells bad news for people opposed to the technology.

Indeed the New York Times goes so far as saying that some residents in Louisiana are calling extracting gas from shale as “a gift from God.”

As the shale gas bandwagon shows no sign of abating, US renewable companies are struggling, according to the NYT.

The paper highlights the case of Michael Polsky, whose wind farm company Invenergy “was doing so well in 2008 that banks were happy to lend millions for his effort to light up America with clean electricity …. But two years later, Mr. Polsky has a product he is hard-pressed to sell.”

The paper continues: “Even as many politicians, environmentalists and consumers want renewable energy and reduced dependence on fossil fuels, a growing number of projects are being canceled or delayed because governments are unwilling to add even small amounts to consumers’ electricity bills.”

So BP will get off the hook, deepwater drilling will continue, the oil industry is in for an easy ride with its friends in Congress, the EPA will be hounded until it stops regulating CO2, shale gas is booming and renewables are in trouble.

The game hasn’t changed at all. Its just got worse.

“One of the problems in the United States is that we haven’t been willing to confront the tough questions,” Paul Gipe, who sits on the steering committee of the Alliance for Renewable Energy, a group advocating energy policy reform tells the NYT.

And with a Republican controlled House, the tough questions just got tougher..