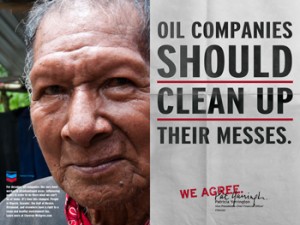 What’s worse it has given its critics a real opportunity to spoof the company’s highly misleading adverts..

And boy are they having fun and games. The the spoof campaign is beginning to go viral.

Ten days ago, the oil giant, stung by criticism of oil companies in the wake of the BP Deepwater Horizon disaster, planned a new advertising blitz, under the slogan “We Agree”, that was meant to highlight the company’s commitment to clean energy, and the community.

But remember Chevron is the same company that is embroiled in a bitter lawsuit about Texaco’s lethal toxic legacy in the Ecuadorian rainforest. Its record in Nigeria ain’t too good either.

However Amazon Watch was tipped off about the ad campaign by actress and blogger Lauren Selman who received a casting call to appear in the ads.

Selman has written about her experience on Huff Post, including the conversation from the casting agency: “The whole BP spill put all the oil companies in a terrible light, and Chevron wants to explain that they’re more environmentally conscious than people realize, and not the bad guys people view them as.”

That’s called greenwashing to you and me.  Amazon Watch and Rainforest Action Network then contacted the Yes Men, who began to work to pre-empt the campaign. They were also aided when Chevorn’s PR agency asked DC street artist César Maxit if he could help put up the new Chevron posters.

Instead, Maxit sent the Chevron posters to RAN. See the video here.

Hours before Chevron’s launch, the activists sent out a spoof press release –“Chevron Corp. announced a new global advertising campaign this week aimed at showing Chevron as a “real people” corporation, and admitting to abuses that companies usually try to hide.”

“Oil Companies Should Clean Up Their Messes,” read one ad, with the small print referring  candidly to the damage done by oil companies around the world. “For decades, oil companies like ours have worked in disadvantaged areas, influencing policy in order to do there what we can’t do at home. It’s time this changed.”

Another ad, “Oil Companies Should Fix The Problems They Create,” said “Extracting oil from the Earth is a risky process, and mistakes do happen. It’s easy to pass the blame or ignore the mistakes we’ve made. Instead, we need to face them head on, accept our financial and environmental responsibilities, and fund new technologies to avoid these mistakes in the future.”

Hours later, after Chevron had derided the hoax, the Yes Men struck again, issuing an attack against its own campaign in yet another fake Chevron press release, which said:

“This hoax is part of an ongoing effort to blame Chevron for 16 billion gallons of crude oil spilled in the Amazon during drilling operations,” said Rhonda Zygocki, Chevron vice president of Policy, Government and Public Affair. “This blame game continues despite Chevron’s long-standing agreement with the Ecuadorian government which very obviously puts the issue behind us.”

The fake press releases, denials and counter-denials were all picked up by the media, some of which were completely spoofed.  “If you really want to snooker the media, it’s pretty hard for them to resist,” said Mike Bonanno of the Yes Men.

He added: “We cobbled together some fake releases and websites with string and thumbtacks and chewing gum, and we fooled some of the most respectable press in the world.”

“Chevron’s super-expensive fake street art is a cynical attempt to gloss over the human rights abuses and environmental degradation that is the legacy of Chevron’s operations in Ecuador, Nigeria, Burma and throughout the world,” said Ginger Cassady, a campaigner at Rainforest Action Network. “They must think we’re stupid.”

Tell you what, Ginger. We agree.