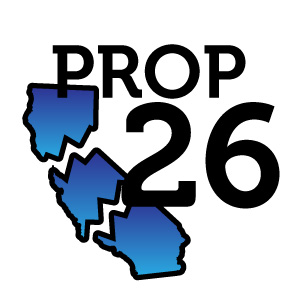 California’s Proposition 26 would increase the legislative vote requirement from a majority to two-thirds for new and increased state and local fees and charges. Many of California’s environmental protection programs are funded with such fees.  Opponents of Prop 26 say that it would make it even more difficult to hold polluters accountable, and to raise revenue for basic services.

As of October 24th, Chevron  is currently the number one donor to the “Yes on 26/No on 25” PAC.  The California Business PAC, an arm of the California Chamber of Commerce, is a close second.  Alcohol, tobacco, and agriculture companies also feature prominently.  Overall, business interests have so far spent one third more on 25 and 26 than they have on 23. Check out prop26.dirtyenergymoney.com.

If passed, Proposition 23 would suspend the California Global Warming Act of 2006 (AB 32) which requires that greenhouse gas emissions in the state be cut to 1990 levels by 2020.

At least 93% of contributions being pumped into California’s Proposition 23 are from energy companies that would be regulated by the energy and climate legislation they are trying to overturn. Much of the money has been used to collect the signatures to get Proposition 23 on the ballot, and to fund research that supposedly proves that clean energy would cost jobs. Check out prop23.dirtyenergymoney.com.