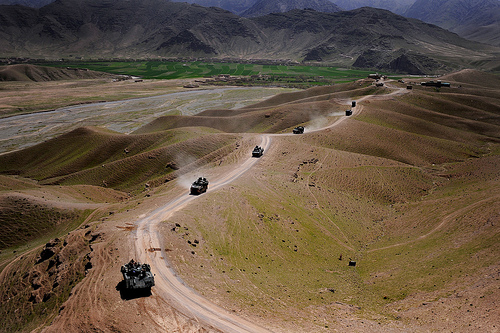 On the fifth anniversary of the Iraq war, a report from Oil Change International, entitled A Climate of War, analysed both the greenhouse gas emissions of the war and the costs involved in fighting that war rather than climate change.

The report contained many shocking facts but a couple were that the projected total US spending on the war could cover all of the global investments in renewable power generation that are needed until 2030 in order to halt current warming trends.

But rather than any altruistic reason to save the planet, it is more about saving their trucks from being blown up.

The story comes hot on the heels that yet another fuel convey supplying the troops in Afghanistan has been attacked and destroyed.
In order to part prevent more attacks, according to the NYT, “the military is pushing aggressively to develop, test and deploy renewable energy to decrease its need to transport fossil fuels.”

The military is used to pioneering the most sophisticated equipment in the world. But obviously not in renewable technology.

So it may come as a surprise that it was only last week that a Marine company from California arrived in Helmand Province with portable solar panels that fold up into boxes and energy-conserving lights; and solar charges for computers and communications equipment.

This is hardly rocket science and is fairly common equipment for many an independent traveller or explorer.

The American navy and marines say they want to have 50 per cent of the power for the Navy and Marines to come from renewable energy sources by 2020.

So now we have electric amphibious assault ships, and biofuel fighter jets. The military are even looking at poppy-fueled biofuels.

“There are a lot of profound reasons for doing this, but for us at the core it’s practical,” argues Ray Mabus, the Navy secretary and a former ambassador to Saudi Arabia. “Fossil fuel is the No. 1 thing we import to Afghanistan,” Mr. Mabus said, “and guarding that fuel is keeping the troops from doing what they were sent there to do, to fight or engage local people.”

It is here that Mabus misses the bigger picture – it would be far more strategic to reduce America’s consumption of fossil-fuels, so the military does not have to invade unstable regimes to protect supplies.

This would be better for the planet and well as America’s wallet. Even a decade ago, it was estimated that the cost of defending oil supplies were at least $10 billion annually.

And earlier this year, Roger Stern, an economic geographer at Princeton, argued that it had cost some $7.3 trillion over 30 years  to patrol the Persian Gulf with aircraft carriers from 1976 to 2007.

So it would make economic and environmental sense for the military not to be there at all. But for that to happen, America has to break the fossil fuel habit.

There is something perverse about the American military protecting oil supplies in Iraq driving around in biofuel tanks, only for the oil to be shipped back home where the domestic vehicle fleet is incredibly inefficient and where the likes of the American Petroleum Institute want to keep the public gripped in fossil-fuel addiction, no matter what the consequences.