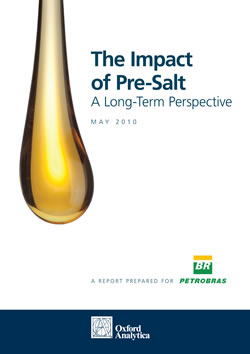 Are investors put off by the risks of ultra deepwater drilling after the Deepwater Horizon disaster?

If the frenzy down in Brazil is anything to go by – the answer is a staggering no.

And the actual demand for shares was double that.

The reason for the excitement is the amount of oil in Brazil’s “pre-salt” fields, so called because they are trapped under several kilometres of seawater, rock and a hard-to-penetrate layer of salt. Some of the reserves are 7000 metres below sea level.

So if you thought deepwater drilling in the Gulf of Mexico was difficult, pre-salt is even more challenging and potentially dangerous.

But despite the technical challenges and costs associated with the developing oil reservoirs so far below sea level, the promise of the new fields has made demand for the share offer “enormous,” argues Don Gimbel, a fund manager at Carret & Company, echoing enthusiasm in the market. “This is a huge opportunity to participate in a very large deposit.”

And it could be very large. What is exciting investors and the industry is that estimates suggest the region may contain 50bn-100bn barrels of oil and gas, dwarfing Brazil’s current reserves of 13 billion barrels.

It would place Brazil in the big boy league of oil producers, on a par with Kuwait and Russia.

As the FT says “It would be hard to overstate the pre-salt’s significance”.

“Brazil,” Ali Moshiri, president for Africa and Latin America at Chevron, tells the paper “is the future for the oil industry.”

There are quibbles in the international industry about the power and control Petrobras will have over the development, but this will not stop the international companies investing in what could be one of the last true frontier regions (apart from the Arctic – see yesterday’s blog)

Ruaraidh Montgomery, senior upstream analyst for Latin America at Wood Mackenzie in Houston, tells the FT: “Brazil is one of the few places with substantial resource potential that has remained open to private investment and, despite the new regulations, the government is not closing the door.”

And if people thought that the Deepwater Horizon would close the door on ultra deepwater exploration elsewhere, then they are wrong.