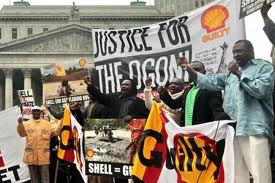 This is bad news, which could have serious ramifications for holding companies legally accountable in the US for their operations abroad.

And it has virtually received no press attention at all.

Last Friday the Second U.S. Circuit Court of Appeals dismissed a suit brought by the Ogoni, who alleged that Shell was complicit in human rights abuses and murder, including of Ken Saro-Wiwa.

The case, filed in 2002, claimed Shell provided transport to the military, allowed company property to be used as staging areas for attacks and provided food to the soldiers as well as paying them.

The plaintiffs sued for torture, extrajudicial killing and other violations under the Alien Tort Statute, which imposes liability for a “violation of the law of nations.”.

The case was related – but separate – to the Wiwa versus Shell legal action that resulted to a $15.5 million payout by Shell last year.

But in a devastating and potentially landmark ruling, the court ruled that alien tort claims can be brought only against individuals, not corporations.

This means that plaintiffs will now have a harder time suing oil companies and other multinational groups over human-rights abuses overseas.

In recent years the 1789 Alien Tort Statute (known as the ATS), which allows suits for violations of ‘the law of nations,’ has been used to target a number of U.S. companies including Chevron and Shell for crimes committed overseas.

However, a 2-1 panel of the court dismissed the suit.  Second Circuit Circuit Judge José Cabranes wrote on behalf of the court.

“No corporation has ever been subject to any form of liability under the customary international law of human rights, and thus the [Alien Tort Statute] . . .does not confer jurisdiction over suits against corporations.”

His decision – unless challenged – is disastrous. “This opinion threatens to effectively stop Alien Tort Statute litigation in its tracks,” said Donald Childress III, an associate professor at Pepperdine University School of Law who specializes in international law.

The Shell plaintiffs said they will appeal the ruling. Their lawyer, Carey D’Avino, said. “We do not believe that today’s decision is the last word on the subject.”

Circuit Judge Pierre N. Leval wrote a separate opinion in which he agreed that the case should be dismissed but disagreed that the Alien Tort Statute applies only to individuals.

“The majority opinion deals a substantial blow to international law and its undertaking to protect fundamental human rights,” he wrote.

He added: “According to the rule my colleagues have created, one who earns profits by commercial exploitation of abuse of fundamental human rights can successfully shield those profits from victims’ claims for compensation simply by taking the precaution of conducting the heinous operation in the corporate form.”

But he agreed that the case should be dismissed, saying the plaintiffs didn’t properly claim Shell intended to cause the Nigerian government to violate human rights.

But it is likely the case will go all the way to the Supreme Court.