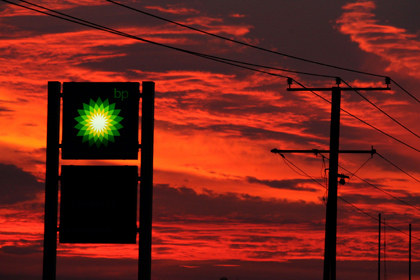 It is not rocket science that fickle City investors responded to the news of BP’s final plugging of the Macondo well by sending the company’s share price rising.

BP’s share price rose by just under 2 per cent  to $38.68, helping to recover a small portion of the billions wiped off BP’s market capitalisation during the crisis.

There is relief in the markets that BP has managed to see out this first part of the crisis, although lingering doubts over the company being found criminally negligent remain. However more and more pundits are saying that this is looking increasingly unlikely.

Yesterday I blogged how the FT thought the disaster would be no more than a “bump in the road” for the oil industry.

But just how big a bump?

For BP to survive now in the US – it might mean no more than a name change.

BP is still facing pressure from many in the US to rename its American service stations or provide those who sell BP brand items with tools to counter the loss of customer loyalty.

“Some things definitely need to go. … So here’s an idea that just might work. Bring back the Amoco name. You purchased the brand some years ago, and ultimately shuttered it. It may be ready for a new look and a comeback,” said Jamey Boiter, a brand strategist at BOLTgroup, in a FastCompany report.

There are even some analysts who argue that BP will come out of this disaster “reinvigorated”.

Jason Kenney, an oil analyst at ING Barings, said BP’s sale of non-core assets to pay for the disaster could, ironically, benefit the company. “They’re still investible; they’re still credible; they’re very much alive and they could come out of this reinvigorated”.

One way they could also perversely benefit is that some of their rivals may not be able to afford the insurance premiums that are likely to come in after the disaster.

The BP oil spill has driven up premiums for insuring deepwater operations by 25-30% and deepwater drilling by 100% or more, according to leading underwriters.

So across the board, oil companies will face a sharp rise in the cost of insuring oil rigs at the start of next year. Global energy premium rates have gone up by between 10% and 30%, according to one of the largest insurers of energy risks, Lancashire.

“The question that board members of oil and gas companies are asking management is, ‘If this were to happen, have they got enough insurance?'” Alex Maloney, chief underwriting officer at Lancashire, said. “We see some clients come to us to purchase double the amount of insurance as previously. A smaller oil and gas company [than BP] probably would have gone under.”

As I have repeatedly bloged, there are not many companies that could have taken a $20 billion hit and survived.

BP’s drilling company Transocean, which owned the rig leased by BP, insured its oil platform at Lloyd’s of London. Lloyd’s has estimated net losses from the explosion at up to $600m. It has asked a judge to limit its exposure as an insurance carrier for Transocean, on the basis that BP was grossly negligent.

Stephen French, managing partner at Legalbill, a legal consulting firm based in the US, said: “If Lloyd’s fails to limit its exposure, it will take a hit in the short term. But in the long run, Lloyd’s and its underwriters will raise insurance rates, and future insured energy companies will bear the cost of past misfortune.”

And if Lloyd’s takes too great a hit then it might not offer deep water insurance.