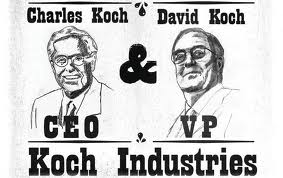 Since then it has emerged that Koch brothers are bank-rolling the ultra-conservative tea party in the US.

Koch industries is also, of course, the #1 provider of dirty energy money in the US Congress. Now it has also been revealed that that the brothers have contributed $1 million to the campaign to suspend what is known as AB 32, California’s landmark climate change law.

Basically the brothers are funding efforts across the country that coincide with their ultra-right wing, climate sceptic, anti-government agenda.

They have promised even more to promote Proposition 23, which is a ballot initiative that seeks to suspend the Global Warming Solutions Act – a law that would force the power industry in California to cap greenhouse gas emissions.

With this latest contribution, proponents of the proposition have raised $8.2 million, with $7.9 million not surprisingly coming from energy companies, most of them not even from California.

In fact only one group donating to the Yes campaign in the last month – the California American Council of Engineering Companies Issues Fund – is from California.

But it is Koch’s financial involvement that has people worried.

“This is a significant game changer,” argues Craig Holman, from Public Citizen.  “They want to stop the state that’s well known for leading the way when it comes to climate change legislation.”

“It would have big implications,” adds George Shultz, the former Secretary of State, who is a chairman of a campaign to defeat the ballot initiative. “That is one reason why these outside companies are pouring money in to try to derail the same thing. At the same time, the reverse is true: they put this fat in the fire and if we win, that also sends a message.”

Gene Karpinski, president of the League of Conservation Voters, who is rallying support against the proposition, called it “by far the single most important ballot measure to date testing public support for continuing to move to a clean energy economy.”

Those opposing Proposition 23 also include Governor Arnold Schwarzenegger, who passed the original law four years ago.

So now the oil industry is targeting Arnie too, calling him an “environmental zealot”.

Charles Drevna, the president of the National Petrochemical Refiners Association, said in a fund-raising e-mail recently:

“We’ve raised about $6 million so far, but unfortunately in California’s expensive media market this is not enough to win the fight against environmental zealots led by Gov. Arnold Schwarzenegger, who seems hell-bent on becoming the real-life Terminator of our industry,”

Don’t worry Mr Drevna, it is you and your pals in the oil industry who are the real terminators …