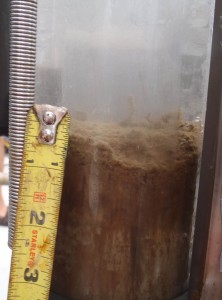 So there is good news and bad from the latest science from the spill.

Last week the US government agencies, the National Oceanic and Atmospheric Administration, the Environmental Protection Agency and the Office of Science and Technology Policy, released a report on dissolved oxygen levels in the Gulf Ocean.

Oxygen levels are important – once the amount of oxygen dissolved in the water goes below a certain level, there is not enough oxygen to support marine life and you get “dead zones”.

The research published last week showed that dissolved oxygen levels have dropped by about 20 percent from their long-term average in the Gulf in areas where subsurface oil was reported.

Whilst a 20 per cent reduction is worrying, these dissolved oxygen levels, measured within 60 miles of the wellhead, are not low enough to become “dead zones.”

The other good news is that the oxygen levels are not getting worse. “All the scientists working in the Gulf have been carefully watching dissolved oxygen levels because excess carbon in the system might lead to a dead zone. While we saw a decrease in oxygen, we are not seeing a continued downward trend over time,” says Steve Murawski, NOAA’s Chief Scientist for Fisheries and the head of the Joint Analysis Group.

He adds: “None of the dissolved oxygen readings have approached the levels associated with a dead zone and as the oil continues to diffuse and degrade, hypoxia becomes less of a threat.”

In all many scientists are pleased about how the oil is degrading. “Based on what I have seen so far, it could have been a lot worse,” argues Lisa DiPinto, acting chief of NOAA’s marine debris division.

As I blogged yesterday, Samantha Joye’s team from the  Department of Marine Sciences at the University of Georgia has found large swathes of oil on the ocean floor

According to Joye, oil can be found “all over the place”, some as much as 2 inches thick.  It can be found as far as 16 miles from the site of the Deepwater Horizon disaster.

“I’ve collected literally hundreds of sediment cores from the Gulf of Mexico, including around this area. And I’ve never seen anything like this,” Joye says.

The oil could have serious implications for creatures who rely on oxygen and sediments from the seafloor to survive, argues Alice Alldredge of the Department of Ecology, Evolution and Marine Biology at the University of California, Santa Barbara.

“This could have a smothering effect,” Alldredge argues. “Oil is toxic. Many organisms are not capable of surviving in toxic environments.”

So no dead zones, just a dead bottom. And the long-term impact of this must be a worry…