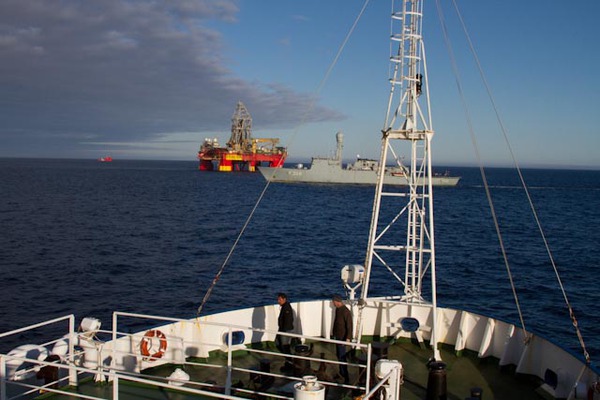 When the Deepwater disaster occurred in the Gulf of Mexico four months ago, many commentators argued that this was a “game changer” that would change the energy debate forever.

Politicians and the public would realise that the ecological and social cost of offshore drilling was becoming unacceptable, the thinking went.

If you morph the lessons of the Deepwater disaster as well as the Exxon Valdez, it is that the risks of deepwater drilling are huge. Everyone though realises that we were lucky in the Gulf, where the warm waters are more able to breakdown the oil compared to the cold waters of the Arctic.

In the the Arctic some 5 million barrels of oil spilt would have been a complete ecological catastrophe as the oil would take years – decades even – to break down.

But the lessons of Deepwater has not been learnt. The oil industry is just carrying on regardless.  Going ever deeper, going ever further into the Arctic.

Take this week’s news about Cairn Energy that says it has found natural gas off Greenland’s western coast.

In the words of respected energy correspondent , Guy Chazan, from the Wall Street Journal, the find is “bolstering hopes that the area could become one of the world’s last significant untapped hydrocarbon provinces.”

Although the find is currently too small to be commercially viable, Chief Executive Bill Gammell said he was pleased with the results. “We’re encouraged because we’ve established there are hydrocarbons in a basin that nobody has ever drilled before that’s the size of the North Sea.”

A new North Sea in the Arctic.

As Guy Chazan argues: “Some of the world’s largest energy companies have gravitated to Greenland’s iceberg-strewn waters in recent years, lured by estimates of its enormous resource potential. The U.S. Geological Survey says the area could hold around 50 billion barrels of oil and gas, more than the total proven reserves of Libya.”

But after Deepwater, when we have witnessed what can go badly wrong when the industry pushes the boundaries of new frontiers, should the industry be there at all?

A Greenpeace protest ship has arrived in the area to protest against Cairn’s, but a Danish warship prevented the protest vessel from entering an exclusion zone around the rig.

Greenpeace argues that “companies like Cairn Energy who chase the last drops of oil at any environmental cost are pushing us in the wrong direction. It’s time to go beyond oil.”

The commentators said Deepwater was a game changer, but the game hasn’t changed at all.

Its as if Deepwater never happened. Because the game is still all about oil..