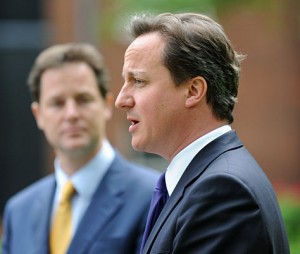 So the UK Coalition government between the Tories and Liberal Democrats is 100 days old this week.

While this political milestone is somewhat meaningless, it does give political commentators a moment to measure how things are going.

When British Prime Minister David Cameron took power, he said he wanted the new coalition administration to be “the greenest government ever.”

Coming from a political party that is historically hostile to environmental issues, this was a bold claim by Cameron.

However, the Prime Minister knows that for many Liberal Democrat voters climate change and other environmental issues are high on their priority. If the Coalition is to survive then it will have to deliver.

Already the signs are not good.

The Liberal Democrats – the junior partners in the Coalition – have traditionally been opposed to nuclear power. Take Chris Huhne, the new Minister of State at the Department for Energy and Climate Change.

This was him two years ago:

“An 80% [carbon reduction] target can be met through wind, wave and tidal power together with the use of carbon capture and storage technology.”

He added: “Ministers must stop the side-show of new nuclear power stations now. Nuclear is a tried, tested and failed technology and the Government must stop putting time, effort and subsidies into reviving this outdated industry.

“The nuclear industry’s key skill over the past half-century has not been generating electricity, but extracting lashings of taxpayers’ money.”

This was Huhne last week speaking on the BBC. He said he was actually in favour of nuclear being part of the UK’s energy mix because he had “no intention of the lights going out on my watch.”

“We are on course to make sure that the first new nuclear power station opens on time in 2018,” said Huhne.

So the first major policy U-turn. And here comes the second:

The Observer reported yesterday that the coalition “is watering down a commitment to tough new environmental emissions standards” this raises the possibility of dirty coal-fired power stations such E.ON’s infamous Kingsnorth plant going ahead.

A flagship policy that both political parties called for in opposition and which they last year tried to force on the Labour government, will now not be implemented in the coalition’s first energy bill to be published this year.

Introducing a so-called “environmental performance standard” (EPS) for power companies would have restricted greenhouse gas emissions from coal and gas plants and encouraged companies wishing to build to use more efficient technology.

An EPS was personally championed by David Cameron, his Chancellor George Osborne and Lib Dem leader Nick Clegg when in opposition as they all opposed Kingsnorth.

For example, in 2006 Cameron first proposed the idea. In June 2006, he said: “I can announce today that a Conservative government will follow the Californian model, and implement an Emissions Performance Standard. This would mean the carbon emissions rate of all electricity generated in our country cannot be any higher than that generated in a modern gas plant.”

He added “Such a standard would mean that a new generation of unabated coal power plants could not be built in this country.”

In July 2008, his Chancellor Osborne repeated the pledge verbatim.

Greenpeace energy campaigner, Joss Garman, tells the paper: “David Cameron made the introduction of new rules to stop the most polluting power stations one of his flagship green policies, and Nick Clegg helped ensure it was a key part of the coalition agreement.

Garman adds: “Both Lib Dem and Conservative MPs voted for the introduction of such a measure just a few months ago, and if they U-turn on this and fail to put this measure into their new energy law, how can they claim to be the greenest government ever?”