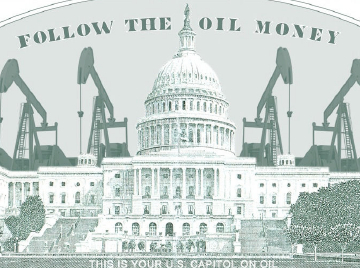 As Congress begins August recess, those of us who care about America’s addiction to oil, climate change, and a clean energy future have been scratching our heads, wondering why, after historic levels of pressure we can’t even pass an oil spill response bill, not to mention a real clean energy or climate bill.

As the new site DirtyEnergyMoney.com reveals, each Congress over the last decade has become more mired in oil money and choked on coal cash.

Over $114 million has been paid by these industries over the last decade to buy access and influence in Congress. Although we won’t know for another six months, the 111th Congress could end up being the dirtiest yet.

DirtyEnergyMoney.com was built by the organization I direct, Oil Change International, using data provided by the Federal Election Commission and the Center for Responsive Politics.

It’s a fully interactive site that allows folks to easily discover, expose, and track how much money their representatives are taking from the oil, gas, and coal industries.

The site is supported by a large and growing list of partner organizations:

Appalachian Voices, Chesapeake Climate Action Network, Energy Action Coalition, Earthworks, Friends of the Earth, Greenpeace, MoveOn, Public Citizen, True Majority, 1Sky, and 350.org. All of the partners will be contacting their millions of members and urging them to tell their Representatives to stop taking dirty energy money.

Some of the key findings of the site so far include:

· Overall, the coal industry has been friendlier to the Democrats than Republicans thus far in the 111th Congress, with over $3.7 million going to Democratic members of the House and Senate, compared with about $2.8 million to Republicans.

The influence of the industry also shows in recent energy votes:

· Senators voting in favor of a narrowly defeated June 10 resolution sponsored by Senator Murkowski that would have weakened the Clean Air Act and blocked new fuel economy standards, took on average two and a half times as much Dirty Energy Money as those who voted against it.

· Senators who voted against a June 15 vote sponsored by Senator Sanders that would have eliminated big oil and gas company subsidies have taken more than 3 times more oil and gas money in this Congress than those who voted for the amendment.

· House votes exhibit similar trends. Members who voted against the recently passed CLEAR Act (HR 3534), which removes the liability cap for oil spills and reforms oil and gas industry regulations, took nearly five times the amount of oil and gas money on average in the 111th than those voting for the Act.

A full list of our preliminary findings can be found here.  One of the strengths of the site is its interactivity, so feel free to investigate and analyze the data yourself.