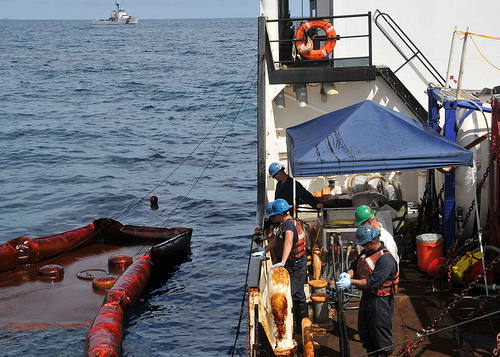 Whatever happens today when BP begins to finally cap its Macondo well with a “static kill”, latest estimates are that the spill is the world’s biggest accidental oil leak.

An estimated 4.9 million barrels of oil gushed from the well before it was capped last month.

When the spill first occurred back in April, people could not have imagined that it would be bigger than the 1979 Ixtoc I leak in the Gulf of Mexico, which gushed 3.3 million barrels, previously seen as the world’s worse.

But BP has beaten that record to officially become the world’s Biggest Polluter.

Only the intentional release of an estimated eight million barrels of oil into the Gulf by Iraqi troops during the Gulf War in 1991 was greater. But that was intentional.

Of this nearly 5 million barrels, scientists said only a fifth – around 800,000 barrels – was captured during the clean-up.

In total, though, about 1.2 million barrels of oil have been accounted for, either burned, captured or skimmed off the ocean’s surface.

That’s about a quarter of the new estimate.

What about the rest? Although an unknown amount of oil has evaporated and been naturally broken down in the warm waters of the Gulf, scientists worry about the amount of oil left in the water column and the long term damage it can cause.

“This further confirms that a lot of the oil is still at sea. And we just don’t know the implications of it,” argues Ron Kendall, director of the Institute of Environmental and Human Health at Texas Tech University.

Kendall will testify tomorrow about his fears that the dispersants have helped much of this oil sink into the deep water.

Already the right wing pundits are predictably trying to argue that the media, environmental groups, conservationists and government scientists over-estimated the likely impact of the spill.

Now that that the oil is disappearing from the surface the disaster is somehow over.

The scientific rational for this is nonsensical. That is like smoking for thirty years and saying you feel fine once you stop, ignoring the cancer growing inside of you.

Scientists have no idea how this much oil will play out in the ocean.  “We’ve never had a spill of this magnitude in the deep ocean,” argues Ian MacDonald, a professor of oceanography at Florida State University.  “These things reverberate through the ecosystem. It is an ecological echo chamber, and I think we’ll be hearing the echoes of this, ecologically, for the rest of my life.”

The spill is also having a psychological and physiological effect on the Gulf’s residents.

The first major survey of Gulf residents conducted since the BP well was capped, undertaken by the National Center for Disaster Preparedness at Columbia University, has found some quite alarming conclusions:

“There’s been a very overt effort by BP and the Coast Guard to project a sense that the crisis is over, but this is far from the case,” said Dr. Irwin Redlener, the director of the center and president of the Children’s Health Fund, a sponsor of the survey.

“Our survey shows a persistent and overwhelming level of anxiety among families living near the coast, driven by both medical symptoms in their children as well as a substantial level of psychological stress.”

Finally BP’s lawyers will be stressed by these new figures. If BP is not found to have acted with negligence, the penalty would be $1,100 per barrel. As about 4.1 million barrels escaped into the Gulf, the fine would be $4.5 billion.

If BP is found to have acted with “gross negligence” through, the maximum penalty would be $4,300 a barrel. That works out at an addition $17.6 billion.

On top of the $30 billion or so it has put aside, that amount could sink BP, no matter what happens over the next few days.