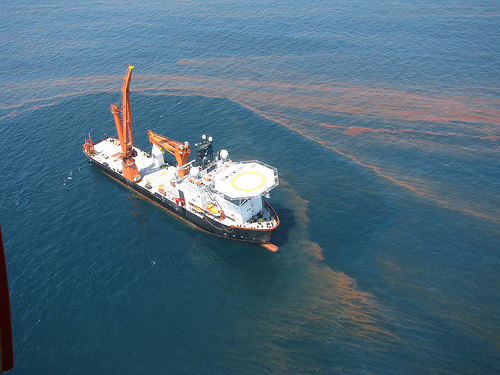 As BP prepared over the next few days to permanently seal its Macondo well, there is growing evidence that its use of dispersants is going to have severe political, ecological and legal ramifications.

The political fall-out from their use intensified last week.

Ed Markey, the Chair of the Committee on Energy and Commerce wrote to the US Coast Guard demanding to know why the Agency let BP use excessive amounts of dispersants, even after being told to radically reduce thier use.

On May 26th a directive from the US Coast Guard and EPA told BP to eliminate the use of surface dispersants except in “rare cases when there may have to be an exemption”.

Since that date 74 exemption requests were made and usually approved.

In some cases, BP asked for permission after it had already used the chemicals. In one case, the Coast Guard let BP use more of the dispersants than the company had applied for.

“In many cases, these applications appeared to be rubber stamped by the Coast Guard, including pre-approvals for weeks’ worth of unlimited use, as well as retroactive approvals for surface applications of dispersants for which BP failed to obtain prior permission,” Markey said in a release put out over the week-end.

He added: “”BP carpet-bombed the ocean with these chemicals, and the Coast Guard allowed them to get away with it. [They are] a toxic stew of chemicals, oil and gas, with impacts that are not well understood… After we discovered how toxic these chemicals really are, they had no business being spread across the Gulf in this manner.”

Erik Fyrwald, the CEO of Nalco, which makes Corexit 9500, the chief dispersant sprayed on the Gulf spill, has defended his product. He argues that government officials have found “no significant impact” from dispersants or dispersed oil. “So with all this positive data,” Fyrwald said, “where’s the negative data?”

But the negative data is beginning to stack up, especially on the impact of tiny fish, crab and shrimp larvae.

As Markey said in his letter: “There has been recent confirmation that the use of dispersants has contributed to the formation of large plumes of oil that are suspended well below the ocean surface. Many experts have raised concerns that these plumes could cause significant harm to aquatic life in the Gulf”.

This harm can either be through poisoning or through oxygen depletion.

The Huffington Post reported last week that scientists have found signs of an oil-and-dispersant mix under the shells of tiny blue crab larvae in the Gulf of Mexico, which is “the first clear indication that the unprecedented use of dispersants in the BP oil spill has broken up the oil into toxic droplets so tiny that they can easily enter the foodchain.”

The orange blobs of oil have been found “in almost all” of the crab larvae they collect in some 300 miles of coastline. Back when the spill started, Dr Riki Ott, a veteran of the Exxon Valdez spill, and critic of the use of dispersants warned about their use, especially because of its impact on fish and shrimp larvae, fears which seem to be now being realised.

“Fish, shrimp and crab larvae, which float around in the open seas, are considered the most likely to die on account of exposure to the subsea oil plumes”, argues the Huff Post, which reports that a team of researchers from Tulane University using infrared spectrometry has detected the signature for Corexit, the dispersant BP used so widely.

“It does appear that there is a Corexit sort of fingerprint in the blob samples that we ran,” Erin Gray, a Tulane biologist, told the Post, although the tests are preliminary, “so don’t say that we’re 100 percent sure yet”.

Another scientist Susan Shaw, the director of the Marine Environmental Research Institute, told the Post.”Corexit is in the water column, just as we thought, and it is entering the bodies of animals. And it’s probably having a lethal impact there.” The dispersant  is like “a delivery system” for the oil, she said.

Backing this up, a group of scientists working for law firms suing BP is now arguing that their testing indicates that the dispersants have made the spill more toxic.

Dr. William Sawyer, a toxicologist, is part of a team of scientists hired by law firms  led by Smith Stag of New Orleans  that are representing Louisiana fishermen and environmentalists.

Sawyer told NBC News that: “We now have compelling evidence that the dispersant has enhanced and increased the toxicity from the spill,” he said.

The issue is not going to go away:  The Senate Committee on Environment and Public Works is due to hold a hearing on dispersants on Wednesday.