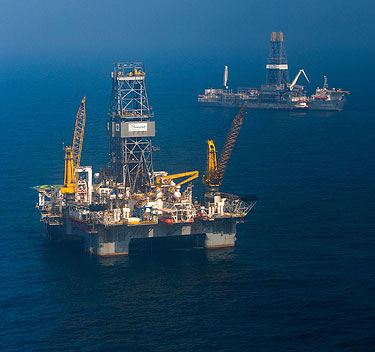 British Prime Minister David Cameron came out batting for BP in Washington yesterday as he tried to “shield” the company over the allegations that BP lobbied for the release of the Lockerbie bomber.

But more importantly, he warned US Senators not to “single out” BP over legislation that might ban BP from drilling in the US.

Speaking on ABC television, he said: “We need to be clear about what BP’s responsibility is: cap the well, yes, clear up the mess, yes, make compensation, yes absolutely – but would it be right to have legislation that independently targets BP rather than other companies? I don’t think that would be right.”

His political intervention will not save the skin of BP’s embattled CEO, with reports this morning that Tony Hayward is set to stand-down in late August or September.

What Cameron’s intervention is partly intended to do is protect BP’s business strategy and that is – as I have pointed out on this blog before – fundamentally based on more deep water drilling.

What Cameron and BP do not want is BP to be unilaterally prevented from drilling  in the Gulf of Mexico, and this is the political point he was making yesterday.

Despite the Deepwater disaster, BP is banking on more deepwater drilling to secure its future. It’s asset sale in the last 24 hours reflects this.

The New York Times’ headline this morning says it all “With Sale of Assets, BP Bets on More Deep Wells”

The paper notes that “BP announced Tuesday that it had agreed to sell $7 billion of oil and gas fields to the Apache Corporation. The assets being sold — in Texas, New Mexico, western Canada and Egypt — are all on land …  the troubled oil giant is now staking its future more than ever on deepwater wells.”

“The Gulf of Mexico, West Africa, Brazil, Egypt — these offshore areas are where you have significant deposits, and this is what BP will continue to go after. BP has an opportunity to become a little leaner and meaner by selling some of its noncore assets on the periphery and emphasize the deepwater production.”

And in that sense the really interesting thing to note is that the disaster seems not to have changed BP’s long-term direction at all.

On this blog we have covered the BP presentation to investors from March 2010 – a month before Deepwater – which showed that Beyond 2015, BP saw growth in:
•    Deepwater;
•    Unconventional gas;
•    Giant fields.

So it still sees deepwater as a top priority. But the company cannot escape the fact that the disaster has changed the game, not least within the industry, where BP might struggle to find partners and for regulators who will want to toughen up safety rules and oversight.

The former concern will not be helped by new revelations from a BP official to the congressional hearing that the firm had ignored warnings ahead of the disaster.

Ronald Sepulvado, a BP well site leader, said he had reported a leak on a critical safety device at the rig to more senior company officials, but it seemed his warnings had not been passed on to the government regulating body, the Minerals Management Service. “I assumed everything was OK, because I reported it to the team leader and he should have reported it to the MMS,” he told the hearing.