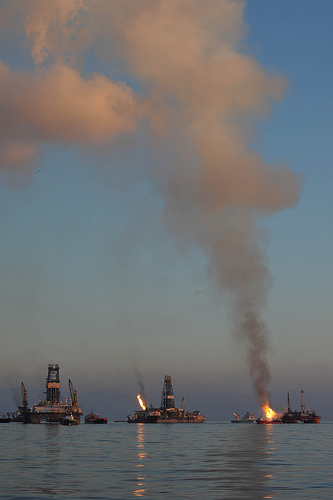 Obama’s presidential Commission into the oil spill starts today and already the focus seems to be about how to improve safety offshore for future drilling in light of the BP disaster.

The Commission is unique in that it unlike other disasters such as Three Mile Island it has started investigating actually during the disaster. It has not waited until it is over.  The panel will take a reported six months to complete its work.

By then, though, will BP still be an independent company?

For anyone interested in the politics of oil, there are two seminal books, “Seven Sisters” by Anthony Sampson, and “The Prize” by Daniel Yergin.

Sampson’s book –written in the seventies – outlines what were then the power houses of the international oil industry, the seven sisters:  Amoco, BP, Chevron, Exxon, Mobil, Shell and Texaco.

Since then, the seven have become four. BP merged with Amoco, Chevron merged with Texoco, Exxon with Mobil, with only Shell not merging with anyone.

But are four about to become three? With one super major?

Early on during the BP disaster there were reports that Shell might be interested in taking over the weakened BP.

But now it seems that ExxonMobil is circulating the weakened beast.  Press reports over the weekend suggest Barack Obama “won’t stand in way” of any bid by the American oil giant and apparently, ExxonMobil had been given a green light by the US government to “take a look”.

Let’s not forget that ExxonMobil is already the world’s largest non-government owned oil firm and merging it with BP would create a huge beasty valued at $400 billion.

But it would certainly be a hostile BP, that would be rejected by many of BP’s European shareholders. Although BP is Britain’s biggest company, a large proportion of its shareholders and investors are American.

Although they are likely to be less hostile, there still would be a clash of cultures. Brash Texan versus British establishment.  There would also be other areas of disagreement – if nothing else the firms’ different stances on climate change.

Another problem would be the name. You can sure bet that ExxonMobilBP would not be an option as it is too confusing. The BP bit could sink without trace.

The news that ExxonMobil is circulating will give added impetus to Tony Hayward’s mission to find partners to add cash to the business.

BP is said to be getting ready to prepare a $40bn “defence strategy” to stop the Exxon bid. This will be released to investors on the 27th July – the same day BP hopes to announce that  the leak is plugged.

Last week he met the Kuwait Investment Office, seen as a friendly investor.

BP is also in detailed talks with Apache Corporation, the US’s largest independent oil group, over selling some of its key strategic assets including a stake in Alaska’s Prudhoe Bay, the largest oil field in North America. BP is also considering asset sales in Vietnam and Algeria.

Apache has a reputation within the oil industry for snapping up the majors’ mature assets and applying cutting-edge technology to squeeze more oil out of them—a strategy it has successfully applied in the North Sea and the Gulf of Mexico.

So whether BP can manage its own destiny or succumb to a hostile takeover remains to be seen. These are going to be intense weeks for BP and its negotiators, as it tries to strike deals with friends and ward off its enemies.

Whatever happens, as Anthony Sampson said, quoting the legendary oilman himself, Calouste Gulbenkian, just remember that “oil friendships are greasy”.

You could a be a friend one day and enemy the next. Just ask BP’s old partners on the Deepwater Horizon..