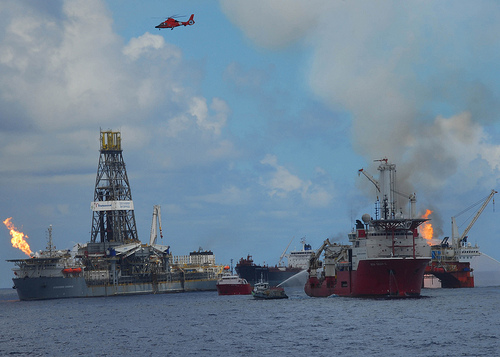 In a date that seems to pander to the needs of the investors and politicians rather than the engineers, BP has set a deadline of 27 July to cap the leaking Macondo well.

According to the Wall Street Journal the capping in not just a physical capping but “a bid to a bid to show investors it has capped its ballooning financial liabilities.”

Firstly, the company needs to be able to show progress by the day, British Prime Minister, David Cameron visits the White House on the 20th July.Seven days later – on the 27th July – the company is expected to report second-quarter earnings and will speak to investors.

Can you imagine the share price surge if the company announced the well is finally sealed?

The Company’s fate literally depends on the success of the relief wells.  As the Financial Times argues: “BP’s fate depends on the success of the two relief wells. Once the leaking Macondo well has been killed, the company can have a clearer view of the size of its liabilities, and its financial position will stabilise. It might be able to strengthen its liquidity position with a bond issue.”

However, the paper argues that, “If the relief wells fail, the company may be doomed”.

The FT also argues that “Relief wells have an excellent record”.  But the team will have to be millimetre perfect. The leaking Macondo well, at its deepest point, more than 13,000ft below the seabed, is only 7in across. That’s about the size of a plate.

It is no surprise therefore that the US government is pushing BP to have a “backup to the backup plan”.

One such plan is to connect the rogue well to existing pipelines in two nearby underwater gas and oil fields. The first would mean laying a pipe to a depleted gas field on the ocean floor two miles away. The second would move the oil to an existing underwater oil field nine miles away. Both would require laying flow lines to connect the leaking well to existing wellheads on these older sites.

And BP has a host of abandoned wells to choose from. According to an investigation by the Associated Press, there are over 27,000 abandoned oil and gas wells beneath the Gulf of Mexico, of which BP alone has abandoned 600 of them.

No one, it seems, has checked to see if any of these other ones are leaking. The AP calls the situation “an environmental minefield that has been ignored for decades.”

As the AP points out many of the oldest wells were abandoned in the late 1940s, “raising the prospect that many deteriorating sealing jobs are already failing.”

Furthermore some 3,500 are characterized as being “temporarily abandoned,” which means they should be permanently plugged within a year, but over 1,000 wells have been in that unfinished condition for over a decade.

As AP says: “In deeper federal waters, though — despite the similarities in how such wells are constructed and how sealing procedures can fail — the official policy is out-of-sight, out-of-mind.”

Maurice Dusseault, a geologist at the University of Waterloo in Ontario, Canada, tells the AP that US regulators “assume that once a well is sealed, they’re safe — but that’s not always the case.”

So wouldn’t it be ironic that BP plugs the Macondo well, but somehow the pollution in the Gulf continues from one of the 21,000 other abandoned wells.