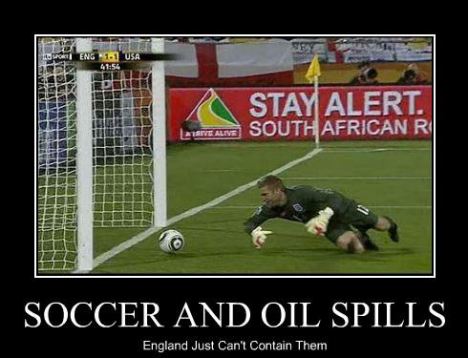 So the viral joke on the internet is that whether it be oil spills or footballs – England can’t contain either.

After England goalie Robert Green’s disastrous mistake against the US on Saturday night at the World Cup – can England get anything right?

For  BP there have been many weeks that have ebbed and flowed since the start of this crisis, but this one certainly is a crunch week that could decide its long-term future.

Cameron then spoke with Obama, who has apparently agree to tone down his anti-BP rhetoric.

The board of BP meets today to back provisionally the deferral of dividend payments and the setting up of a voluntary funds to compensate victims and businesses affected by the disaster.

No news though is expected until after Svanberg and Hayward meet Obama on Wednesday in a first head to head since the disaster started.

Obama is looking to keep up the pressure on BP by undertaking his fourth tour to the region today and tomorrow before giving his first Oval Office speech tomorrow on a plan to legally compel the company to create an escrow account to compensate businesses and individuals.

Fifty-four Democratic senators have also written to Tony Hayward, demanding that BP put an initial $20 billion into an escrow account. Although BP has pledged to pay clean-up costs and damages, “history has taught us that corporations often fail to live up to their initial promises”, the lawmakers argue.

According to the Financial Times this morning, ExxonMobil, Shell, Chevron and ConocoPhillips will testify that the oil spill “was preventable’’, publicly distancing themselves from BP.

Arguing that with “best practice’’ companies can avoid repeating such accidents, the executives will push for a resumption of drilling.

On Wednesday, there is the crucial meeting between Svanberg, Hayward and Obama.

On Thursday, Hayward can expect a hostile grilling at the House Committee on Energy and Commerce, which will be broadcast live.

Hayward has been having special media coaching for the event.

After Thursday, Hayward is expected to return to the UK and out of the media glare to be replaced a senior American executive from the company.   “Ultimately this has been as big a public relations disaster for BP as it has been an environmental catastrophe for the Gulf,” one well-connected source told the Times. “When America was crying out for the cool assurance and go-do-it of Tom Hanks in Apollo 13 they got bumbling Hugh Grant in Four Weddings and a Funeral.”

BP engineers have until the end of the weekend to speed up containment of oil, but that could run into difficulties as the company will not have enough tanker capacity to take the oil until next month.

Added pressure will be applied on BP with the news that top executives could face up to 15 years in prison, according to some of America’s top legal scholars. Jody Freeman, Professor of Environmental Law at Harvard Law School, has told The Times newspaper this morning that if criminal negligence could be proved then “the law certainly provides for prison for environmental crimes”.

She said that under normal circumstances, the maximum criminal penalty in such a case would be up to three years in prison but in those where death and serious injury had occurred this could increase to 15 years.

To try and undermine any legal case against it there is increasing evidence that BP Is destroying evidence and censoring journalists – A subject we will cover more of this week.

In Orange Beach, for example, Rki Ott reports how “people told me BP wouldn’t let them collect carcasses. Instead, the company was raking up carcasses of oiled seabirds. “The heads separate from the bodies,” one upset resident told me. “There’s no way those birds are going to be autopsied. BP is destroying evidence!””